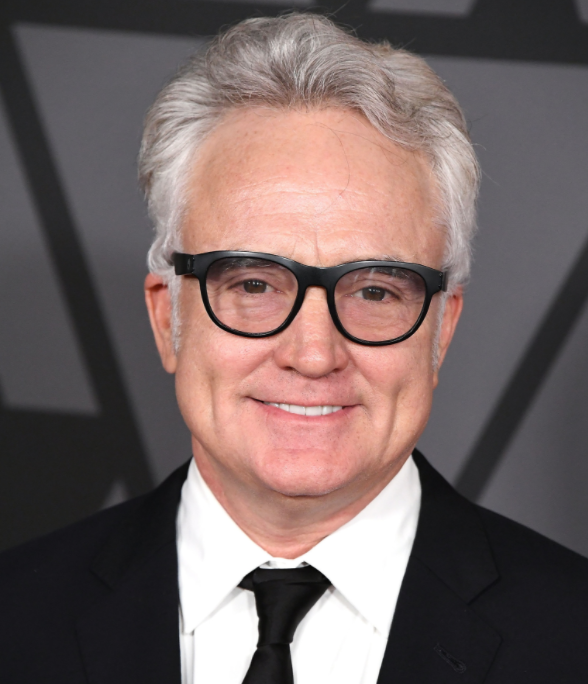 Since the longest Award Season in Hollywood history has wrapped, it's time to check on new projects. So, TPSC and Wavemaker Creative just kicked off principal photography on SHARE from commercial director turned feature first-timer Ira Rosensweig. Here's the full news item from the helmer and producers...

Share, with a screenplay by Benjamin Sutor and story by Rosensweig & Sutor, follows a man who awakens stripped of all of his possessions and trapped in a bare room. Aided by a primitive computer, he must learn to survive in his new isolated existence where entertainment is the only currency.

Since each character is physically isolated, the filmmakers innovated a groundbreaking shooting process, which involves the construction of multiple identical sets with integrated camera systems, teleprompters and live event technology to completely immerse the actors in the sci-fi world of their characters. This system allows the actors to fully interact both with each other and the computer interface central to the story in real time, while giving the director and crew a precise pre-visualization of the finished product.

TPSC’s Kevin Matusow commented: “This is a story that is so relevant to what we are all experiencing now throughout the world. Ben and Ira set out to create a social media allegory and exploration of late capitalism about those who feel trapped in a system they can’t escape. Now it has taken on a whole new dimension in light of our recent social unrest and current pandemic reality.”

Bradley Whitford, a classically trained stage actor, quickly gained overnight fame as Josh Lyman on NBC’s “The West Wing,” for which he earned an Emmy Award. He also received Emmy Awards for his work as Commander Lawrence in the third season of Hulu’s award-winning series “The Handmaid’s Tale” and for his role in Amazon’s “Transparent,” making him the first performer to have won the guest actor Emmy for both comedy and drama series. Whitford will next be seen in the fourth season of “The Handmaid’s Tale.” He is also known for his work in the Academy Award-nominated films Get Out and The Post and recently wrapped production on Lin-Manuel Miranda’s tick, tick… BOOM!.

Brazilian born actress Alice Braga received critical and international recognition for her stirring performance in Miramax’s Academy Award nominated City of God and recently lent her voice to the Academy Award winning Pixar feature Soul alongside Jamie Foxx and Tina Fey. Braga is currently starring in USA Network’s wildly popular drama “Queen of the South” and is next slated for the highly anticipated sequel of The Suicide Squad from acclaimed director James Gunn, joining the star-studded cast that includes Margot Robbie, Idris Elba and Viola Davis. She also recently starred in Luca Guadagnino’s HBO series “We Are Who We Are.”

Danielle Campbell starred in Aaron Kaplan’s “Tell Me A Story,” for two seasons opposite Billy Magnussen, Paul Wesley and Kim Cattrall. Popular for her portrayal of the young powerful witch "Davina Claire" on CW's hit series “The Originals,” Campbell was also loved on Freeform’s “Famous in Love.” Her other feature film credits include Tyler Perry’s Madea's Witness Protection, Disney’s Prom, the Original TV Movie Starstruck, and the indie The Poker House opposite Jennifer Lawrence in her feature film debut.

TPSC recently acquired the hotly sought-after life rights of “Tiger King: Murder, Mayhem and Madness’” Mario Tabraue, which they, along with Anonymous Content, are currently developing into a TV series. They also recently announced the acquisition of the rights to two series from USA Today and Wall Street Journal bestselling author and RITA® Award-winner Kennedy Ryan: Hoops and All the King’s Men, the six books of which TPSC will develop for television. The company has wrapped filming on the comedy Unplugging, which stars Golden Globe nominee Eva Longoria and two-time Emmy-nominated actor Matt Walsh, as well as the true crime thriller American Murderer starring Tom Pelphrey, Ryan Phillippe, Idina Menzel and Jacki Weaver. Recent film releases include Bryan Bertino’s The Dark and the Wicked, which TPSC produced and is currently available on digital after releasing in November, which is certified fresh on Rotten Tomatoes.