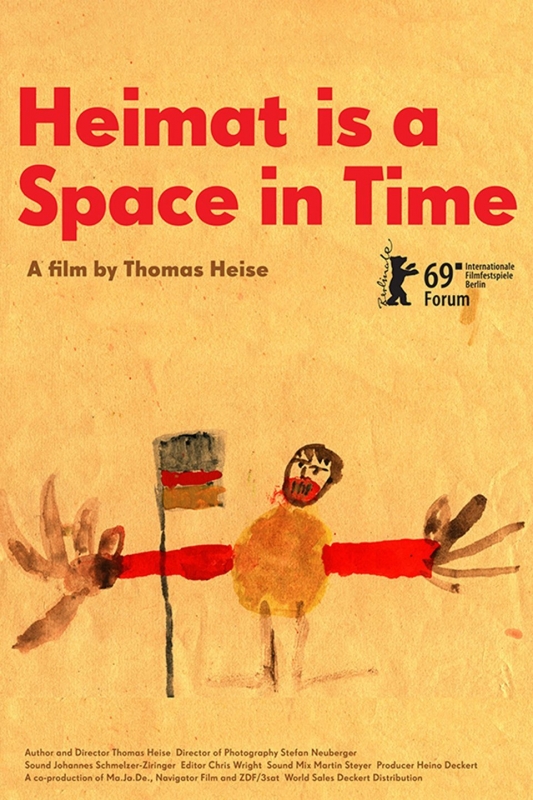 The German Austrian production Heimat is a Space in Time (Heimat ist ein Raum aus Zeit) directed and written by Thomas Heise was probably the most challenging selection in the 2019 New York film festival program. Screened in the Projections section it premiered in the United States and was discussed as outstanding by festival insiders though very few had seen it and the US distributor Icarus films had not announced release plans. Heise’s difficult production does not fit standard criteria and could be classified as a documentary feature, an extended personal essay, an archival biography of Germany’s past conflicts spanning a century or a visual celebration of communication. Running for 3 hours and 38 minutes without a break its subtitled version challenged the audience (and festival programmers). In 2019 Heimat is a Space in Time was shown in 18 international film festivals and received numerous awards.

Heimat meets the criteria of a reflexive endeavor by presenting complex and difficult issues, forcing the audience to think about the subjects presented rather than to ‘consume’ them and keeping the issues in our minds for review. It helps that the film was produced without any interference from background visuals or the customary soundtrack. Heise presents possibly from an archaeological perspective four generations of his family in Germany’s tortured past. It extends from the 1912 reading of his grandfather’s high school essay rejecting violence and the 1917 images of distant relatives serving as medics in the army to a concluding commentary 90 years later by Guenter Maschke about the illusions of German Identity, of failed revolutions and of the 1989 unification of East and West Germany. At the end Heise is cleaning up the debris in his mother’s apartment who is about to pass away in the early 90s.

Heise, who grew up in the former socialist East German democratic republic as the son of a philosophy professor dismissed by its functionaries uses the family archive he discovered with letters, photos and other mementos as the documentary context for Heimat. It provides an open-ended backing to Heise’s enlightening cinema which refrains from using any footage not recorded by him or his crew. Any audience expecting visual documentation from the century will be disappointed. To the contrary Heimat is shown in black and white with only few brief segments in color and the black and white, though frequently grey, background shots provide a tapestry with few movements disturbing the spoken word. Some motives re-occur, slowly moving freight trains, railway and subway stations, the moving blades of wind turbines in the background and people rushing for trams and subways. What carries the film is the use of language from Heise’s family letters and correspondence, and his seemingly detached oral presentation of the selections. It is a celebration of the spoken and written word rather than a celebration of creative filming that makes Heimat an outstanding if not already classic work. The visuals reinforce the oral message sometimes with a devastating impact.

In the early part of Heimat Heise reads in sequence the letters exchanged between members of his families living in Berlin and Vienna from the end of 1939 to July 1942 with his Jewish grandmother Edith the dominant figure. In a brilliant step, Heise selects a typed long paged German listing from 1941 to 1942. It slowly moves up the screen while he reads the letters. The document shows the names, addresses, and dates of birth of those individual, including families, who have been selected for deportation to Eastern Europe. What Heise’s relatives reveal in their letters is the systematic destruction of his family in Vienna. They must abandon their home and possessions, are forced to sell belongings for food, lose the right to use public transportation, no longer have access to coal for heating, and are finally forced on short notice to an assembly point for transportation to Eastern Europe. Silence sets in.

As Heise points out, his coming from a mixed half-Jewish background with strong social democratic and socialist leanings and intellectual orientations created a perfect setting for making Heimat. What makes his audio-visual essay also appealing is that no footage was filmed specifically for it. Rather he used material he recorded before or images his crew came across accidentally.