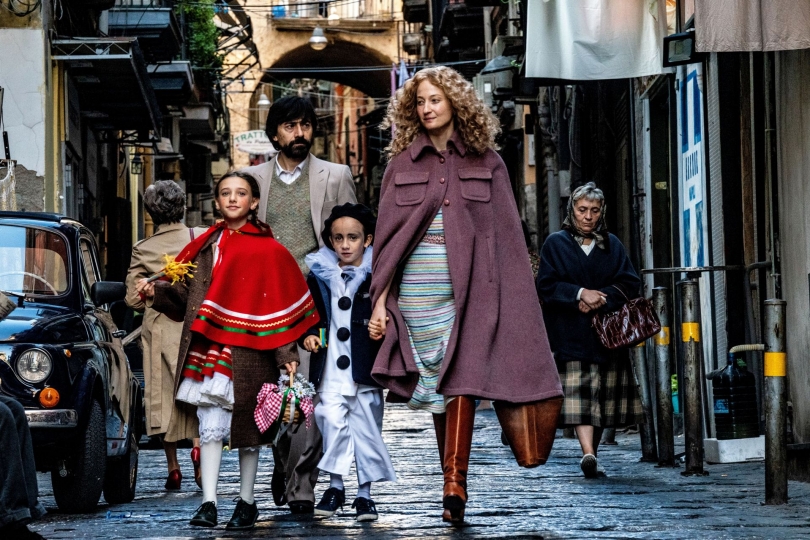 “Recently, we have all feared that cinema might become extinct,” says Daniele Luchetti. “Yet during the quarantine it gave us comfort, like a light gleaming in a cavern. Today we have understood something else: that films, television series, novels, are indispensable in our lives. Long live festivals, then, which allow us to come together to celebrate the true meaning of our work. If anyone thought it served no purpose, they now know it is important to everyone. With Lacci I am honoured to open the dances of the first great festival in unexpected times”.

“It’s been eleven years since the Venice International Film Festival was opened by an Italian film.” says Alberto Barbera. “This happy opportunity was offered by the wonderful film directed by Daniele Luchetti, an anatomy of a married couple’s problematic coexistence, as they struggle with infidelity, emotional blackmail, suffering and guilt, with an added mystery that is not revealed until the end. Supported by an outstanding cast, the film is also a sign of the promising phase in Italian cinema today, continuing the positive trend seen in recent years, which the quality of the films invited to Venice this year will surely confirm”.

Naples, early 1980s: the marriage between Aldo and Vanda begins to break down when Aldo falls in love with young Lidia. Thirty years later, Aldo and Vanda are still married. A mystery about feelings, a story of loyalty and faithlessness, of resentment and shame. Betrayal, pain, a secret box, a home laid waste, a cat, the voice of people in love and that of people out of love. From the novel by Domenico Starnone, one of the New York Times’ 100 notable books of 2017, this is the new film by Daniele Luchetti.

Lacci will be screened Wednesday September 2[SUP]nd[/SUP], in the Sala Grande at the Palazzo del Cinema on the Lido di Venezia, on the opening night of the 77[SUP]th[/SUP] Venice Film Festival. Produced by IBC Movie with Rai Cinema, Lacci was written by Domenico Starnone, Francesco Piccolo and Daniele Luchetti.

Daniele Luchetti was born in Rome in 1960. Sacher Film produced his first film as a director, titled Domani accadrà (It’s Happening Tomorrow, 1988), which won the David di Donatello for best debut director. His next film, Il portaborse (The Yes Man, 1991), won him his first critical acclaim: well-received at the Cannes Film Festival, it won the David di Donatello for best screenplay and best actor. He then directed La scuola (School, 1995), I piccolo maestri (Little Teachers, 1998) and Mio fratello è figlio unico (My Brother is an Only Child, 2007), starring Elio Germano and Riccardo Scamarcio, which was presented at Cannes in the Un Certain Regard section and won 5 David di Donatello awards. Luchetti returned to Cannes in 2010, this time in competition with the film La nostra vita starring Elio Germano, who won the award for Best Actor on La Croisette. The film also won three David di Donatello including Best Director. Luchetti’s most recent work is Momenti di trascurabile felicità (Ordinary Happiness), which he made in 2019.
You must log in or register to reply here.
Share:
Facebook Twitter Reddit Pinterest Tumblr WhatsApp Email Link
Top