Overview of the US business for the week of Monday, April 5 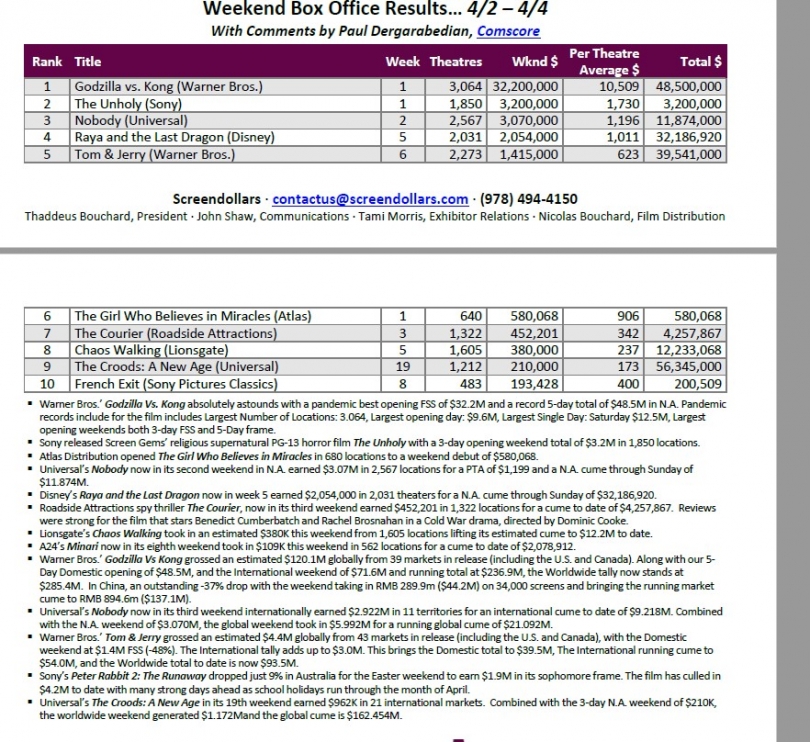 Godzilla vs. Kong has shaken the U.S. box office back to life since its mid-week opening. The monster sequel from Warner Bros. earned $48.5M in five days since last Wednesday, with $32.2M coming in over Easter weekend. This result represents a record-breaking opening since the pandemic began 14 months ago. Sony's horror film The Unholy also debuted this weekend, taking second place with $3.2M in ticket sales. Universal's R-Rated action thriller Nobody followed in a close third place by earning $3.1M in its second weekend in theatres, now with a 10-day cume of $11.9M.

Our summary of Industry News begins with an article from the Wall Street Journal in which exhibitors express frustration with Disney on the studio's decision to release the upcoming Marvel superhero sequel Black Widow both in theatres and on Disney+ simultenously. Disgruntled exhibitors point out that this decision comes despite the recovery in moviegoing which is beginning to take hold and a history of chart busting box office results for Marvel Studios superhero films. We also discuss the easing of restrictions on exhibitors in LA County and across the U.S. As of Monday, most exhibitors in California are now able to operate their theatres at 50% of their maximum capacity, making it easier for them to operate profitably once again.

In the Hollywood Report, Martin Grove interprets the meaning of this weekend's box office success for Godzilla Vs. Kong. Warner Bros. appears to be on the way to rehabilitate its image with exhibitors, due to the fact that it has been relatively generous with its terms for splitting ticket sales and WB theatrical releases now include the three largest box office openers of the pandemic - also see Wonder Woman 1984 released at Christmas and Tenet released last Labor Day. Gower Street highlights the details of a promising March both in international and Domestic markets. Godzilla vs. Kong was the first global box office hit since the pandemic began and March produced the highst Domestic box office result in over one year.

Our Studio Release Calendar provides a detailed list of film releases through early June. We conclude with a run down of the most recent studio release changes, MPAA film ratings announcements and important new trailers released last week.