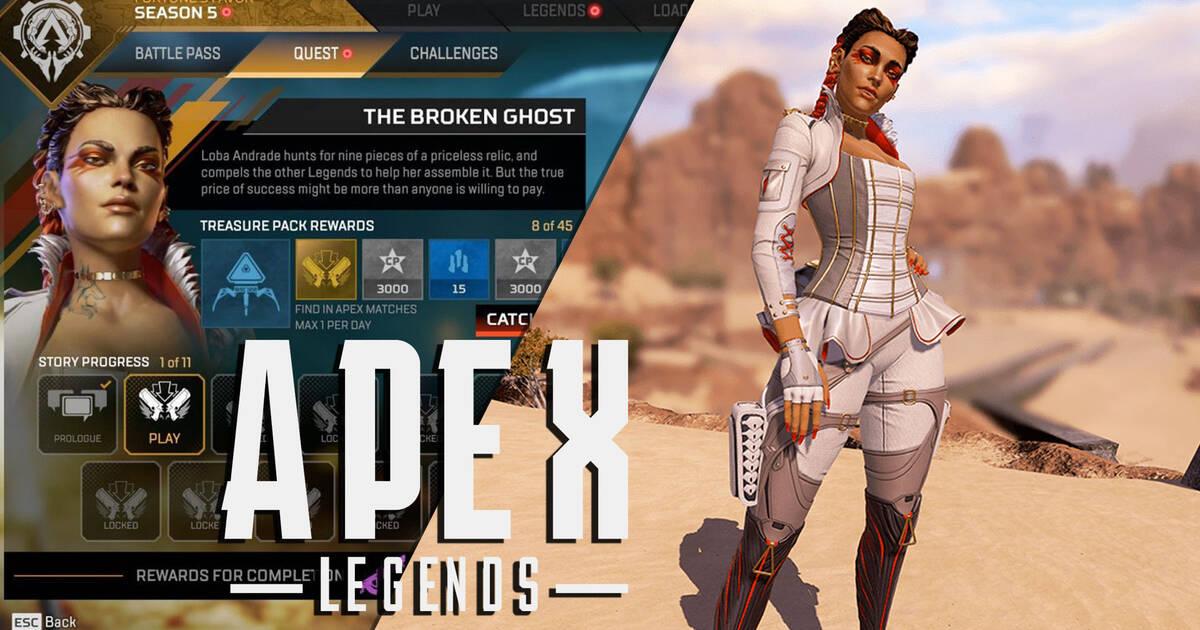 Apex Legends has finally entered fully into his Season 5: Favor and Fortune. Since yesterday, the players have already enjoyed lots of news. As usual, a new playable character, map changes, various adjustments, a new battle pass and much more awaits us in the Battle Royale of EA and Respawn. Then we show you the main patch changes who has received the game.

Of course, one of the biggest draws of Season 5 is the inclusion of a new character. In this case it is Andrade Wolf, which we have already been able to see in depth throughout the last days, from the announcement presentation of season 5 to a trailer dedicated entirely to show the special abilities of this thief of high society.

The players can get hold of Loba in exchange for 12,000 Legend tokens or for 750 Apex coins. The character falls into the support category, such as Lifeline. We have already tested it and we can assure that it will give a lot of game to the games, its offensive capacity is spectacular and we are looking forward to seeing what plays the professionals make with it. Below you can check your special skills.

Changes in the Can de los Reyes map

Can de los Reyes has suffered some major changes that immediately attract attention when jumping on the map. From sharp new lighting to iconic areas that have fallen forever to make way for other exciting and dangerous ones.

Goodbye to Skull Villa and Dome of Thunder

The highlight is that Skull Villa and Dome of Thunder are no longer. Instead they have appeared Remains, a bay on a rugged coast with areas interconnected by zip lines. Respawn's intention with these changes is to diversify the game and the rhythm through this map, so that the action does not focus only on one place.

The Ares Installation and Capacitor

New places have also been added such as Installation and Capacitor Ares, in the upper corner of the map. It is a Maritime platform huge next to the old areas of Repetidor and wetlands, which connects to swamps. In it there are high-quality buttons and many possible routes by which to advance towards the ring.

Cargo towers are one new addition to the open world of Apex Legends. By interacting with the control panel, you can activate a burst that restores the ultimate ability of all players and players on the loading tower platform. It is a very powerful tool that offers new points of attention and allows platoons to design strategies that previously they could not have attempted.

A number of small updates have also been applied to the map, as well as a lot of bug fixes. And it catches your attention a kind of places buried by the mapsuch as hatches or underground facilities that may be related to the new missions in Season 5.

As promised, special missions with a certain storyline arrive in the game. It is about a quest for 9 pieces or fragments of mysterious relics They will last the entire season and little by little they will unlock their parts. Now they can be found every day a treasure box on the games button, and these boxes will serve to unlock the progress of the mission and get unique rewards.

Also, as usual, we have a new battle pass totally renewed with more than 100 objects to get. Including one new series of classification ranges. The main menu tabs have also received a facelift to present all of this new content.

In the field of the characters Loba is not the only novelty. We have several legends that have been retouched, with the special mention of Mirage who receives an interesting rework in his abilities. Below we show you all.

The new update does not bring any new weapons for the first time in an Apex Legends season. Respawn currently considers that there are a good number of weapons, however, changes have been made to many of them and the skull piercer accessory is back for the Longbow DMR and Wingman.

Apex Legends it's a free to play Battle Royale available for PC, PS4 and Xbox One. Do not hesitate to visit our complete guide of tips and tricks or take a look at our review to learn more about it.

The COD team killed almost everyone in a game, breaking the Warzone record

Trollhunters Defenders of Arcadia, based on the Netflix series, debuts in September