The starting point of our post-apocalyptic town: a caravan.

Actually, building games are primarily about one thing: we want to get bigger! But since Banished at the latest, building games have been showing themselves from another side more and more often. It's not just about expansion, it's about survival.

Our small settlement is then no longer threatened by armed neighbors, but by natural forces that rob us of our livelihood. Endzone also hits the same notch: A World Apart. It is not the frosty winter like Banished or Frostpunk, but the radioactively contaminated wasteland that makes it difficult for us to spread out.

A bed on the cornfield

The end story of Endzone is quickly told. A bunch of terrorists probably had a powerful problem with nuclear power plants and simply blew them up in droves. That did not necessarily benefit human health.

That is why it quickly crumbled into underground facilities, only to leave it 150 years later. So imagine a story similar to Fallout, only combined with the seriousness and look of a stalker. 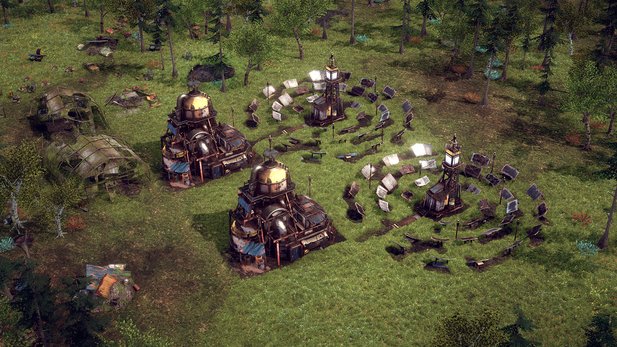 As soon as mankind starts to colonize the contaminated surrounding area again, we have to take responsibility. Because we are the leader of a small group of people who are trying to gain a foothold above the ground again. To do this, we collect resources in the classic way, for example by cutting down trees or collecting scrap. And of course we also have to fill the bellies of our newcomers and create corn fields for this.

We simply cannot move up residential buildings and accumulate resources in peace. Because even if 150 years have passed, the country is of course not yet free from the aftermath of the nuclear disaster. They can be quite violent at times, which is why we have to prepare our settlers for the worst.

According to the developer, Endzone should provide a dynamic and credibly simulated environment when released. This starts with variable values ​​for moisture and radiation in the subsurface and extends to unpredictable environmental disasters.

For example, the water supply can come to an abrupt halt when there is a severe drought. Or radioactive rain that destroys crops and makes residents sick without the appropriate protective clothing. To survive these events, we need to prepare accordingly.

How far is the end zone?

If everything goes according to plan, the developers – who also come from Wiesbaden – want to publish Endzone this spring as an early access version. The game is currently in a closed beta phase, in which pre-orderers can primarily participate.

How do you like the end zone? Have you been able to spend a few hours in beta? Write it in the comments!