The new update for Doom Eternal is currently causing frustration among many players.

Doom Eternal is getting new content today – and it causes controversy. Actually, the update should only have brought new content, such as one special kind of New Game +, also a revised anti-cheat protection for the multiplayer.

But exactly leads to stunk. The reason for the excitement is one potentially harmful software, which comes with the new update and allows significantly more access to your data than would actually be appropriate. At least that's the criticism.

What's in the new update?

The patch primarily extends the single player. From now on your Slayer will be even more powerful: As the game progresses, you can level up in Doom Eternal, bringing your character up to level 250. If you have reached this milestone, you will immediately receive a so-called Echelon. You can use this again to catapult yourself back to level 1, but in return you get a new insignia as a gift.

So you start leveling again and get stronger than ever. You can do this several times, so the season will be extended again. Of course, you will keep your progress and the equipment you have received until then. This feature was logically missing in the original Doom Eternal: 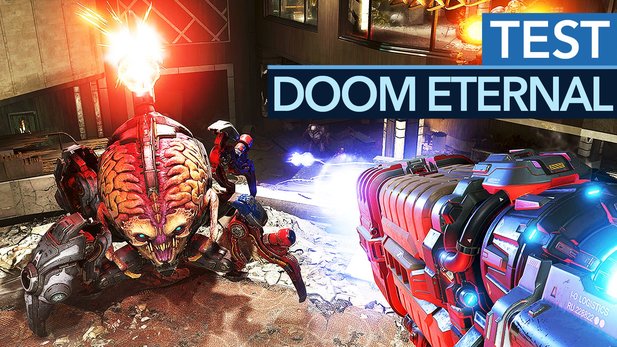 In addition, a whole range of small problem fixes and performance improvements await you, but also another major innovation: Similar to a mixture of Dark Souls and Middle-Earth: Mordor's shadows can now rank opponents who have defeated you and appear as stronger Versions in other players' game.

They then get enormous amounts of life, armor and ammunition. How exactly the system works, colleague Mathias explains in his article about the new functions of the update.

In addition, the update brings the implementation of the software Denuovo anti-cheat into play, which should maintain fairness in online mode battlemode. From now on it is no longer possible to play the game without the software. As Bethesda explains, the driver starts as soon as the game starts. And ends as soon as it is closed "for whatever reason". So also after crashes.

Denuvo causes a dispute: Denuvo Anti-Cheat has a very decisive difference to the usual Denuovo Anti-Temper. The latter disguises your code when playing and makes it much harder for hackers to get your data. The only disadvantage is minimal loss of performance.

Security in danger: Denuovo Anti-Cheat, on the other hand, also has the goal of protecting you from Internet piracy, but has a massive security hole. The software runs on the so-called Kernel Level Ring-0, which means in plain text that it has the absolutely highest privilege level on your computer. So if someone managed to corrupt the software, your entire computer and all the data on it would also be affected.

The individual rings indicate the level of how much access a program has on your computer.

Why does this vulnerability make it into the game?

The community seems to agree that the developers did not want to cause any deliberate damage, but at the same time demand that the software be switched off immediately. In a forum post on the Bethesda official website, one user commented:

"I agree that due to the widespread fraud in multiplayer, an anti-fraud solution had to be implemented; however, Denuovo Anti-Cheat is one of the most invasive software components that you can have on your computer from a security, data protection and stability perspective. "

The official patch notes regarding data protection from the developers themselves say:

"Denuvo Anti-Cheat does not take screenshots, does not scan your file system or streams shell code from the Internet. The software can be uninstalled at any time using the" Add or Remove Programs "dialog."

However, this hardly appeases the critics. After all, a crash of the program could lead to the complete uselessness of your computer and further bad damage, regardless of whether it should or not. It is particularly criticized that the players were not informed about it. Instead, the software was simply added under the radar with the update. According to the author of the article, this is "unacceptable".