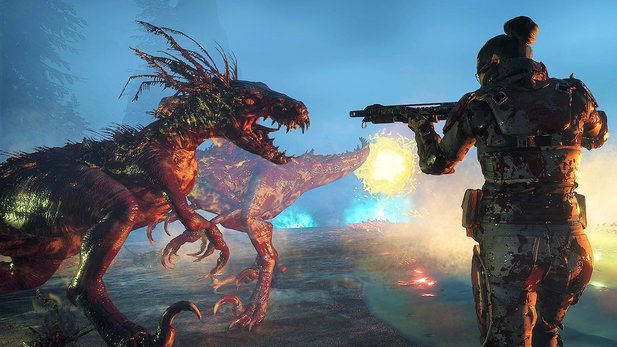 Dinosaur: In Ark we ride them, in Jurassic World: Evolution we cherish them, in Second Extinction … we cause them to die out. At least if we play successfully. After all, we ourselves claim to be the ruling species on earth.

In the upcoming co-op shooter Second Extinction, dinosaurs have conquered the earth a second time. We grab two friends with huge guns and fight the beasts to get our world back.

Systemic Reaction, a new Swedish studio by generation zero and just cause developer Avalanche, is responsible for Second Extinction.

Second Extinction does not have a release date yet, it does exist on Steam a closed beta in summer 2020 instead of. If you are interested, you can apply for participation on the official website.

What is Second Extinction about?

The introduction trailer gives a good impression of what a game Second Extinction wants to be. The focus is on fast shooter action and the visually impressive mutant dinosaurs, as well as the screenshots next to the trailer:

The Steam description gives an overview of the core features. Second Extinction is therefore a "cooperative first-person shooter for three players, in which your goal is to exterminate the mutant dinosaurs that have conquered the world."

If you want to see how dinosaurs developed in video games from 1980 to the modern age, we recommend our special Dino picture gallery.

The Through Sherif Saed, Tuesday, May 12, 2020, GMT The …
Epic Games' success with Fortnite seems to be unstoppable. The …