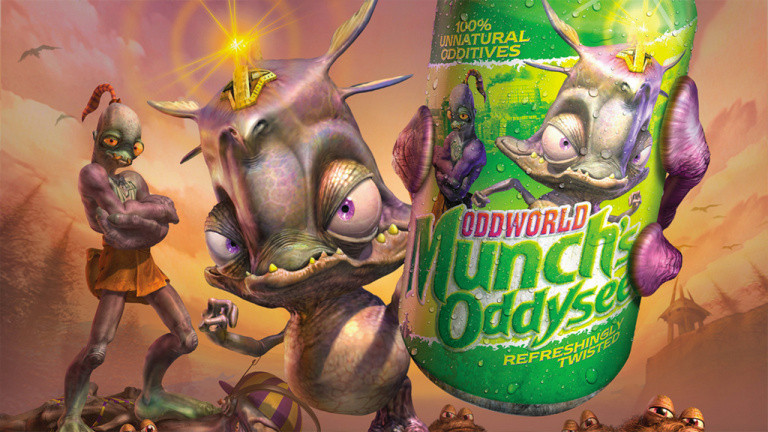 Born on PlayStation first of the name, the Abe series is the fruit of two defectors from Hollywood cinema: Lorne Lanning and Sherry McKenna. Founders of the Oddworld Inhabitants studio, they decided to move away from the seventh art to turn to video games, first to make their expertise in computer graphics speak, and then to take advantage of the interactivity of the media. Believing that 3D is still in its infancy, the duo opted for 2D graphics with a cinematic approach, a striking depth of field and a contrast – especially in the use of light sources – which contrasts with the competition. First called SoulStorm, the project becomes Abe's Odyssey and will be the subject of an even more successful sequel. Satisfying the world of capitalism, the franchise depicts an ecological message and draws its inspiration from various works, including the film Soleil Vert and the novel La Ferme des Animaux by George Orwell. The public is at the rendezvous and it is logical that a new episode, Munch's Oddysee, is scheduled. Considered on PlayStation 2, the title arrives on Xbox and will remain, for years, a cake exclusive to Microsoft's machine. Since then, the bouncing creature and its sidekick have joined other platforms and it is precisely for the Nintendo Switch to welcome the green couple. The weight of the ages, technological evolution, the expectations of the players are all unknowns that can tarnish the reputation of a work, especially when memories embellish the past.

In the late 1990s, the creation of Munch’s Oddysee was a real gamble for the entire studio team. At the time, 3D was definitely democratized and Oddworld Inhabitants decided to tackle the creation of an immersive and semi-open world with a myriad of small areas responding to different puzzles. For the staff in place, the challenge is significant since the use of 3D, unlike the techniques used before, requires a complete re-appropriation of the originals. For Lorne Lanning and Sherry McKenna, the idea is to reclaim everything that makes this satire of capitalism successful by bringing new possibilities. The game has been designed so that players feel that the little creature they play is the last of its kind and that the situation is hopeless. In short, make them understand that she is the only one, although she is one of the last links in the food chain, who can save the world (exactly like Abe in the previous episodes). Initially, the studio wants to continue its collaboration with Sony and plans to release the game on PlayStation 2. Work begins and the project evolves day by day but nothing is set in stone as to the platform that will host the game. It is ultimately an incredible story (see box) that will lead Oddworld Inhabitants to sign an agreement with Microsoft to make Munch's Oddysee an exclusive launch title for the Xbox. Lorne Lanning is not without surprises and somehow manages to resist the American ogre who wants to call the game Abe & Munch’s Fun Adventures and make it a title for casual players. Fortunately, it will not be… But the interested party certifies it today: the giant of Redmond saved his studio from bankruptcy and he was able to count on an inspiring, motivated and not devoid of ambition group which allowed the team, thanks to the means available, to go further in its intentions.

Anti-hero par excellence, Abe continues his rebellion against industrial civilization. Recognizable by his sewn mouth, his tattoos (obtained during his previous adventures) and his unsightly look, the globular-eyed Mudokon has only one goal: to save his compatriots from the tyranny of meat grinders. The tutorial thus gives the keys to this new adventure and remembers the fond memories of the PlayStation versions. If the character can tiptoe, run, jump or even … drop a cloud of smells from elsewhere, he still has this full range of dialogues that allow him to communicate with his fellows. All the Mudokons they save from slavery are invited to follow it, stop, work (yes, yes) or attack. Because the flight of individuals is far from being a Sunday walk. The Glukkons are careful and do not hesitate to take out heavy artillery when necessary. In other words, you have to play it tricky to avoid ending up in lint in cans. Abe, to get rid of obstacles, must take control of his environment by recovering and invoking Spooces (seeds used to activate mechanisms) or by bewitching the enemy to take control of it. Even if the universe is in 3D, we find all facets of the gameplay of the 32-bit originals. But this time Abe is not alone!

As the name of the game suggests, it is accompanied by a hilarious face creature called Munch. The last survivor of his hope, this Gabbit aims to revive his family and annihilate the yoke of the Vykkers, creatures adept at questionable scientific experiments. The catch is that this dear Munch, in addition to not having the mouth of the job, has an incredible evil to move on the ground. His thing is swimming! Fortunately, his fate wanted the Vykkers to graft a sonar on his head, which allows him to electrocute his targets but also, and above all, to deliver small critters with sharp fangs, the Fuzzles. And there, you will understand, the latter react like good little soldiers that Munch will be able to exploit. So there is this ambivalence between two individuals, one large and agile, the other small, fragile but formidable swimmer. And Munch’s Oddysee is precisely based on this difference in skills. It may seem very strange to embody such a character but it is a totally assumed decision of the studio who wanted the players to feel the vulnerability of the protagonist but, also, his endearing side. Munch's movement was modeled on the movement of small birds when they jump. They are adorable in their way of moving but also in permanent danger because of their tiny size. As they grow, this fragility disappears. Munch was born from all these inspirations but the developers supported, in addition, his lonely attitude and his naivety.

The history of the PS2 trailer

As the PlayStation 2 has just arrived in Japan, a trailer comes out of nowhere and presents the first PS2 images of the future Abe game. Immediately, the world press rightly took hold of the phenomenon, creating quite a stir. In a developer discussion, Lorne Lanning revealed the incredible story behind the streak. What happened was that GT Interactive, the publisher behind the Abe series, was bought by Infogrames. Shortly after, Infogrames faced budget cuts and, by extension, Oddworld Inhabitants found itself with a hole of seven million dollars. To adapt to financial constraints, while allowing the company to survive, the team decides to create a trailer with the elements (assets) of the previous games (by mounting something quickly done via 3D Studio Max software and by swinging a video in Quicktime format on a CD) announcing that it is PS2 gameplay. Obviously, at the time, few studios released titles to come on PS2, which makes Phil Harris, one of Sony's pundits, who knows nothing, completely crazy. The story will eventually settle but the studio had no choice but to hit hard to convince other publishers to take an interest in them, the budget cut making even the slightest ambitious development impossible. The project, succinctly envisaged on PS2, will pass on Xbox to become a launch title.

The title of Oddworld Inhabitants takes up the concept of cooperative games. If Abe and Munch are solo during the first levels, they act quickly in tandem. Both have the capabilities that are essential to the smooth running of the adventure and the distributors, dispatched here and there, grant additional skills for a short period. Munch becomes faster or is equipped with a laser immobilizing his adversaries while Abe gains in resistance or jumps higher. Munch’s Oddysee is essentially based on this principle and the whole works well thanks to a clever level design and neat puzzles. The environments are more or less vast according to the levels but the universe is coherent and the humor, present in different forms, gleefully participates in the quirky side of the game. Do not be surprised to collect, with a crane, Sligs to give as pasture to Slogs (a kind of ravenous canine). Munch’s Oddysee uses gray matter, immerses itself in a totally extraordinary world and presses, with pleasure, on its satirical side. Compared to its origins, it has lost nothing of its aura. And that’s the main motivation that players will have.

Now, if we focus on adaptation itself, we can only be disappointed by the total lack of translation. It's a mystery, but the Xbox version remains the only one, to date, to be fully localized (except for the unofficial patch of the PC version). More hilarious French voices (Ohé, lopettes…), more texts and panels in the language of Molière… we have to be content with the original sound. It's really a shame not to have taken over the translation of the Xbox version (even if that is not worth the excellence of the dubbing of PlayStation games, with an Abe camped by the same doubler as Mickey at the time). In terms of graphics, it is like what we had on the Microsoft machine but the rendering is smoothed like on the more modern versions of the game, especially on PlayStation 3 or PC. The Nintendo Switch therefore collects a port without embellishment but the game remains really pleasant and deserves to be discovered if it is not already done. And since Nintendo's little machine runs everything without problems, it would be a shame to do without it. Moreover, the team indicates that a third classic Oddworld will be announced this year. No doubt, Abe has the wind in its sails!

Thanks to Lorne Lanning for telling us about the genesis of Munch's Oddysee.

On the television or in portable mode, Munch’s Oddysee remains equal to itself, that is to say a satirical work which relies on its humor and its quirky side. Introducing the principle of cooperation (as well as the aquatic levels) in the series, the title has aged rather well and distills an ingenious gameplay with many mechanisms and preposterous situations to live. Its artistic direction, its hilarious characters, its successful soundtrack … each element contributes to the immersion in the world of Oddworld. Finally, we regret that no French translation is available because it was one of the strengths of the original. But to perfect its gaming culture, the discovery of the series and this Munch’s Oddysee is all good.

Give your opinion on this game!