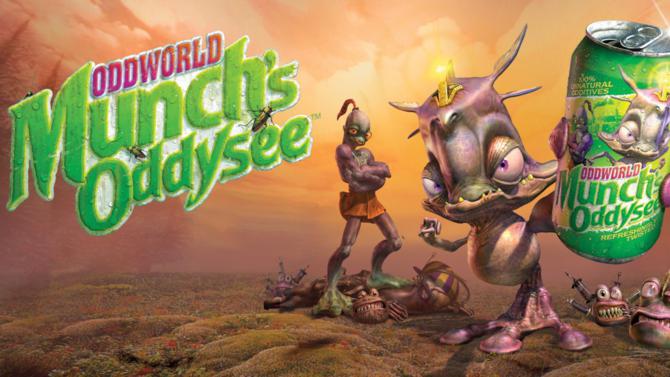 Second part of the pentalogy imagined by Lorne Lanning, but third game of the series in reality, Oddworld: Munch's Oddysee was part in 2001 of the launch catalog of a whole new machine, first step of the Microsoft glove in the very disputed market of consoles living room: Xbox. Change of generation requires, the series operates a 3D turn with this episode, then involving rethinking its gameplay mechanics. start with the introduction of a second character that can be controlled, in addition to the iconic Abe: Munch, the last survivor of his kind. Having already benefited from a little bit of HD polish a decade ago, the title is today debuting on a Nintendo console, the Switch, for a mixed result.

While he is held prisoner, Munch, the last Gabbit of his kind, manages to escape. On his way, he meets our dear Abe, who has come to lend him a hand to free the unfortunate creatures still under the yoke of the infected Vykkers laboratory workers.

Abe to the rescue

Anyone who has already put their faces on a title from the Oddworld license knows how fascinating the universe designed by Lorne Lanning is, with its gloomy atmosphere and its sometimes down-to-ceiling humor, which does not prevent the development of 'a real reflection on the flaws of an excess industrialization, destructive of the surrounding ecosystems. The beauty of this imaginary world is fully expressed in the many and (always) magnificent cinematics of the game

, testimonies of a time when an immense gap existed between synthesized images and sequences in real time. Regarding the latter, rather they hold the road, thanks to the smoothing HD already operated there is a decade.

However, we can regret a glaring lack of variety in the environments crossed, which are strictly limited to swamps and factories which all give in a green tone, where the first two 2D episodes enjoyed a colorful and varied background. Also note theextremely responsive soundtrack which, except during cinematics, is content to form loops of a few seconds …

Fluid in all circumstances, the game does not escape a few technical problems. During my game being a little over 10h, the AI ​​of the allies (Mudokons following Abe in this case) got stuck in the decor, which forced me to restart the sequence, and the 'one of my backups did not load correctly, requesting a previous backup. It is not very dramatic but for the porting of an HD edition already existing, did a little stain. Portage which happens by the way from any French location (while the original game offered it), without subtitles

; so when the characters squeak more than they speak, I let you imagine the effort it takes to capture even one word in two.

While the first two titles released on PlayStation only allowed us to embody Abe, he invites us to follow Mgr’s predilections, the player can alternate between the two in most missions. Each presents a certain number of puzzles (bypassing / neutralizing enemies, unlocking doors, triggering mechanisms …) which need to call our two comps intermittently. The two are also quite complementary: when Abe can jump, direct his Mudokons or enchant enemies, Munch can swim, get away in a wheelchair or give orders to the Fuzzles, small aggressive hairballs that obey him. If we add that the distributors who grant different temporary bonuses (speed, increased jump capacity for Abe, invisibility, possibility of electrifying his opponents for Munch …), the approaches are rather varied.

One of the principles of the game, inherited from previous episodes, consists in rescuing the maximum of Mudokons, Fuzzles or Gabbits eggs in order to be able to benefit from the "good end", if the quarma is above average. It spices up the game a bit, even if it's offset by some really frustrating and repetitive sequences, especially during Munch's direct confrontations with the Vykkers towards the end of the game. At times, the game turns into a box and not very rewarding die and retry; we therefore welcome the inclusion by the developers of a rapid backup system because we will use it very, very often.

We can however regret that they did not have the good idea to adapt some keys since, for example, the B key is pressed at the same time to jump, grab a Mudokon or use the dispenser, which sometimes results in three to five attempts to achieve the desired action. It is all the more incomprehensible that other keys are almost never used when they are used: one of them only serves to run … or drop a pearlouse.