From the start, Valorant had to put up with comparisons with Counter-Strike. No wonder, as the new tactical shooter is noticeably inspired by Valve's classics. It even goes so far that a map designer and ex-CS professional was brought on board as a developer for Valorant.

But what are the differences in weapon handling? The well-known CS: GO Youtuber and expert Warowl took up this question and worked out the differences between Valorant and CS: GO in terms of gunplay. We list the five most important in this article.

Please note that the current version of Valorant is a beta. Changes before release are therefore possible. As of now there are the following differences between CS: GO and Valorant in Gunplay.

While CS: GO calculates the damage to the characters in four different zones, Valorant only needs three.

CS: GO: The damage of hits in Valves Shooter varies depending on whether hits land on the head, chest and arms, stomach or legs.

Valorant: Riots Shooter, on the other hand, manages with three zones. Hits land either on the head, upper body and arms or on the legs.

This supposedly small detail can be crucial for experienced CS players. If you have trained yourself to shoot the abdominal area to cause increased damage, this tactic does not work in Valorant. These hits are counted as upper body hits. Only the head hit deals more damage in Valorant. 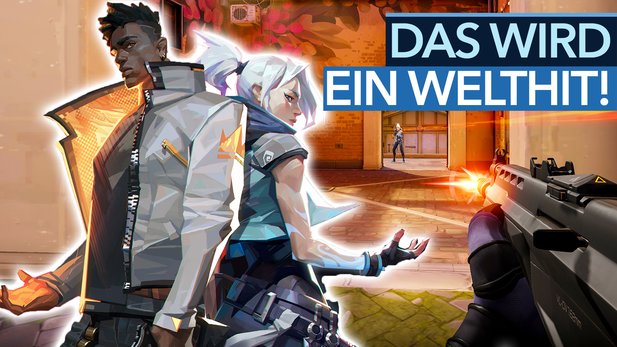 
Valorant – Preview: DAS will be the next big multiplayer shooter

Valorant and CS: GO both use a hitscan system for the Gunplay. Fired bullets do not cover a path through the levels, but land immediately at the destination. However, this can be difficult for newcomers to understand due to the predefined recoil patterns of both games.

At Valorant, learning these patterns, in which the bullets land at the destination fire, is a bit more difficult than in CS: GO. This should particularly concern competition-oriented players who ultimately have to have high standards.

CS: GO: Here, all balls hit in the continuous fire at the same predefined location. Assuming the starting point of the crosshair is the same and the player stands still when shooting.

Valorant: A dash of chance mixes into the recoil patterns. The vertical recoil is predefined, while the horizontal recoil is somewhat random. Say: You can memorize the patterns on the X-axis, the Y-axis is good for small surprises.

So experienced CS: GO players have to get used to it a little. As Youtuber Warowl notes, this can only be accomplished with a lot of practice.

Both in CS: GO and in Valorant you can set your crosshair yourself. We have gathered what you should know about the Crosshair in an extra feature:

How to optimally adjust your crosshairs in Valorant

Valorant has visors on almost all weapons

We had already noted it in our preview preview of Valorant: Almost all main weapons have a practical sighting device, which not only simplifies aiming with a slight zoom. It also converts the recoil pattern.

Without visor: The crosshair barely moves during continuous fire, while the impact points of the bullets slowly move upwards. This system is also represented in Counter-Strike. In Valorant, it is suitable for both close-range and more distant targets, since there are no mali for sight-free shooting. With most weapons, this type of shooting also results in a higher firing order.

With visor: The visor moves with you and always points to the place where the ball strikes. This can be perceived as more understandable, but it carries the risk of disturbing the shooter in his spatial orientation.

The sights in Valorant not only help aim, they also change the gunplay.

In gun mode, many weapons shoot a bit slower. Some shooting irons even have their own fire modes especially for the sighting mode. For example, the Bulldog assault rifle fires a short burst in zoomed mode.

With CS: GO it is easier: Sights are reserved for the two main weapons Steyr AUG and SG 553. Sniper rifles, on the other hand, have special sniper sights in CS: GO as in Valorant.

Other differences in gunplay

Damage drop: In CS: GO weapons have a damage drop, specifically an even damage reduction with increasing distance to the target. In Valorant, this is different for each weapon, and staggered. The exact graduation can be read in the purchase menu on each weapon.

Shotgun Pattern: With Valorant it is striking that the distribution of the individual projectiles of a shot load ends up in the circle crosshair shown. So players have a direct indicator to see if a range is suitable for a shotgun attack.

In Valorant, the circle shows the "spread" of the shot levels.

Valorant also has exceptions here: The Bucky model has an alternative fire mode that can only be used at a distance, but more than halves the bullet spread.

Do you have experience in both shooters? How do you feel about the differences between CS: GO and Valorant? Feel free to share your opinion with the community in the comments!