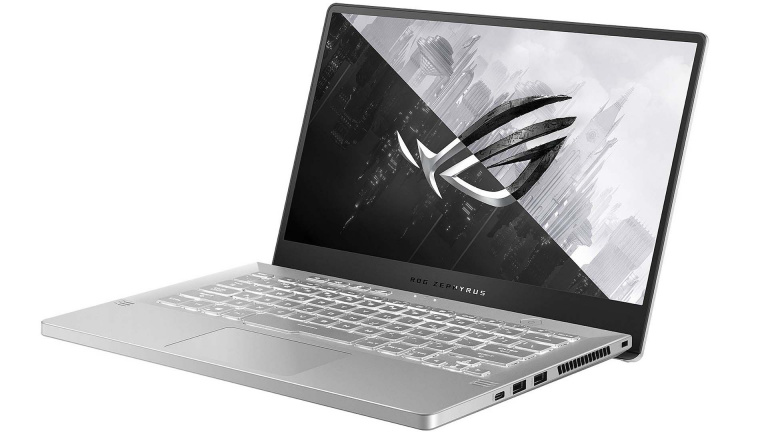 When you think of a laptop dedicated to gaming, the 15 or 17 inch format comes first. But Asus ROG tries a slimming operation and launches the Zephyrus G14 with a 14 inch screen. On the program: one of the latest AMD processors, a GeForce RTX graphics card, all in a 1.6 kg chassis.

Well known on the PC market dedicated to gaming, the manufacturer Asus ROG is tackling here a little represented segment: the ultraportable which is also used to play. The Zephyrus G14 only weighs 1.6 kg and is less than 18 mm thick. However, it incorporates components worthy of a good gaming PC, starting with Latest generation AMD processor and GeForce RTX 2060 Max-Q graphics card. What to play comfortably in 1080p, wherever you are, and without making concessions? This is what we will see in this test.

Manufacturing quality: ROG know-how is there

Asus ROG laptops are mostly solidly designed and this Zephyrus G14 is no exception. We are thus faced with a very compact chassis (32.4 x 21.7 x 1.8 cm), but which exudes solidity. The whole is essentially composed of a mixture of aluminum and magnesium, and the area around the keyboard benefits from a mat treatment of the most beautiful effect, which has the advantage of repelling fingerprints. In terms of colors, this model opts for gray and white, with a touch of fantasy on the hood: a set of tiny holes which, on some models, incorporate a panel of customizable LEDs. This is not the case with our test version or all models currently available commercially.

When lifting the screen, the hinge has the good idea of ​​slightly raising the area dedicated to the keyboard, which provides additional typing comfort. At the back, the exhaust system will diffuse a little warm air in the lower part of the screen, but at a reasonable temperature. Two other ventilation grilles are located on either side of the PC, to guarantee better heat dissipation. It is also on the sides that we find the relatively sparse connection of the G14 : an HDMI 2.0 output, a 3.5mm jack and a USB-C 3.2 port on the left, 2 USB Type-A 3.2 and a USB-C 3.2 right.

Note that the USB-C port on the left is also compatible DisplayPort 1.4 and can also be used to charge the PC. However, it is not powerful enough to properly power the graphics card in game and it will therefore only be used for office use. Still, the possibility of powering it with a “standard” USB-C charger is very good news. However, we regret the absence of an Ethernet port or an SD card reader. We also wouldn't have balked at an additional USB port.

Side entry area, the Zephyrus G14 is doing well, despite the fairly small keys and a touchpad that is just as much. The chiclet type keyboard is very pleasant to use, thanks to a fairly long stroke and good typing feedback. Writing text or playing for several hours won't be a problem. Of course, given the very compact size of the machine, you have to ignore the numeric keypad.

However, we note a defect: the backlight, adjustable on 3 levels, is white on a gray background, making the legibility of letters and symbols quite difficult. And do not count on RGB, this model takes the side of sobriety, both in its choice of colors in its design. In the ray of good ideas, the fingerprint sensor located under the power button above the keyboard makes it easy to unlock the PC thanks to Windows Hello. Configuration is done quickly in Windows 10 settings and the sensor is very responsive.

Asus ROG, however, makes a curious choice for this model, by simply removing the webcam. An absence that seems difficult to justify, since the camera could very well have been located under the screen, as is the case on several competing models.

Screen: 120 Hz in Full HD which is going well

The screen of the Zephyrus G14 may be in 14 inch format, it is nonetheless a good gaming companion. The IPS matte panel thus displays a definition of 1920×1080 pixels, for a refresh rate of 120 Hz. FreeSync is also present. The image occupies a good part of the frame, the edges on the sides measuring only 7 mm. In total, we see a good chassis occupancy rate of 77%. Well calibrated in terms of colors, this screen also displays a fairly high contrast ratio of 1240: 1 and a maximum brightness raised to 340 cd / m2. The image stands out well, the colors are faithful and the mat provides good visibility, even in bright light.

Note that the PC includes an automatic brightness adjustment, especially on battery, which can greatly reduce the readability of the screen when you are outdoors. It is however possible to deactivate it via the Radeon settings: go to "AMD Radeon Settings Lite" then in the "Display" tab. From there you can set vari-bright on or off.

The Zephyrus G14 is available in several versions, all with an AMD Ryzen 4000 processor. We are testing here the “high-end” model, which incorporates a Ryzen 9 4900HS, 16 GB of RAM (DDR4 3200 MHz), a GeForce RTX 2060 Max-Q graphics card (6 GB), and a 1 TB NVMe SSD. On paper, a very nice configuration, which gives hope for a very good level performance. Recall that this generation of Ryzen 4000 processor was announced last January during the CES in Las Vegas. Engraved in 7 nm, the Ryzen 9 4900HS has 8 physical cores / 16 virtual cores, for an operating frequency which can go up to 4.3 GHz.

We launched a benchmark with Cinebench R20 in multicore and the result is without appeal: with a score of 4065 points, the Ryzen 9 4900HS outperforms most mainstream AMD processors, but also Intel, whether for laptop or desktop PC. It thus scores higher than the Core i7-7700K or the Ryzen 7 1700X (two CPUs for desktop PCs). We launched the same benchmark on a Gigabyte Aero 15 laptop with a Core i7-8750H, which barely exceeds 2060 points. Even the all-new Intel Core i9-9980H, which also has 8 cores, seems outdated based on CPU-Monkey statistics.

Concretely, this means that the Zephyrus G14 is an excellent machine for working on CPU-intensive tasks such as video editing or 3D modeling, as well as software that can take advantage of its multiple hearts. In game, the impact of such a processor is less, but there is very little throttling, with operating frequencies that remain around 4.15 GHz on The Division 2.

At ease in 1080p for gaming, but limited RTX side

As for the graphics card, it should be noted that this “Max-Q” version of the GeForce RTX 2060 offers slightly lower performance than that offered by a 2060 for desktop PC, the fault being a slightly lower operating frequency ( here on average at 1300 MHz, in boost frequency, against 1680 MHz for an RTX 2060 of desktop PC). The results are still very correct given our various tests, but it's still difficult to exceed 60 FPS on the most demanding games, unless you lower the level of details.

So, on Red Dead Redemption 2, you can expect 46 FPS at the “Balanced” level of detail, while Borderlands 3, at the maximum level of detail, goes up to 59 FPS. Same story for Assassin's Creed Odyssey which, in “Very high”, displays on average 58 FPS. As for the use of ray tracing in compatible games, it is only possible to activate DLSS in the options. In this case, Control runs on average at 41 FPS (at the highest RTX level), but Metro Exodus will have trouble exceeding 38 FPS. By disabling RTX, but keeping the maximum level of details Control goes up to 45 FPS and Metro Exodus to 47 FPS.

Of course, other less greedy titles will shoot at more than 60 FPS at a high level of detail. On titles like Doom Eternal, Shadow of the Tomb Raider or Apex Legends, you will be even closer to 70-80 FPS.

His Achilles heel? The noise

But such a level of performance in such a compact chassis comes at a price and it’s probably your ears that will get the bill : the Zephyrus G14 is noisy, especially when you play, but not only. Thus, even for office use, ventilation will be heard, even if it will remain weak and very acceptable.

The Armory Crate house application (above) allows you to apply different ventilation profiles, but the noise at stake remains very high anyway. The noise level in this case exceeds 50 dB, with the added bonus of a rather sharp and unpleasant breath. For comparison, a room plunged into silence (but not soundproofed) has an average level of 37 dB. To summarize: you will necessarily need a helmet to play in good conditions and if possible be alone in the room, unless the person with is either very tolerant … or also wears a helmet.

Thanks to its very compact format, the G14 seems to be an ideal machine to transport everywhere and one can imagine using it for long hours without having to plug it into the mains. This is not entirely true. Let us not forget that the couple CPU / GPU which it integrates remains greedy in energy, the PC consuming between 30 and 40 watts within the framework of an office automation use and between 90 and 115 watts in play. Under these conditions, the battery integrated 76 Wh allows office use of a handful of hours, and much less in play. We thus launched a video streaming test under Netflix, with the screen brightness at 60%, which lasted 5:15. In game, do not expect to last more than 2 hours, with the Nvidia Battery Boost option activated, which will limit the frequency of the GPU and block the number of FPS to 30. The PC is accompanied by a 180w charger small size (15×7 cm) and therefore easy to carry. It allows a full recharge of the PC in just over 2 hours.

With the Zephyrus G14, Asus ROG offers us a concentrate of power in an ultraportable format. Equipped with an all-new, particularly powerful AMD processor and a GeForce RTX 2060 Max-Q that does a lot of the work for 1080p gaming, it can easily be transported thanks to its weight of less than 2 kg. A good game machine for those who want power wherever they are, but don't want to get off the shoulder with a pad. This debauchery of performance has a price, however, namely a particularly noisy ventilation and a fairly low autonomy, even in office automation. A great gaming laptop anyway, but not for everyone.

Metal Max Xeno: Reborn is presented in a new batch of images