Scrap Mechanic can currently be found in the Steam top sellers.

Overnight, the four-year-old building game Scrap Mechanic suddenly becomes an absolute hit. Instead of the regular 4,000 simultaneous players, the number of players climbs to over 40,000 – the reason for this is one long-awaited survival update.

The Update released on May 7th. You can see how much the number of players has exploded afterwards in the following embed:

What is scrap mechanic?

Scrap Mechanic is a Multiplayer sandbox title from the Swedish developer Axolot Games, by creating your own vehicles and machines. There are (almost) no limits to your imagination. Scrap Mechanic has been in early access since 2016, but already has many fans on Steam and 90% positive reviews there.

You can join in with your friends three game modes explore the profession of robot mechanic:

What's in the survival update?

With the new survival update, a completely new game mode added to Scrap Mechanic. You crash with your spaceship on the way to a farm planet and from now on you have to fight for your survival. To make matters worse, you will also be hunted by the farm robots, whose circuits are burned through and would rather make your life difficult than harvesting carrots.

In addition to the new game mode, there are a number of other innovations, such as one huge graphics update and randomly generated maps where you have to survive. In addition, you can now customize your character individually. All innovations can be found in the developers' announcement on Steam. But you will also find a small roadmap of which areas Axolot would like to focus on next.

The Trailer for the new survival fashion you can see here: 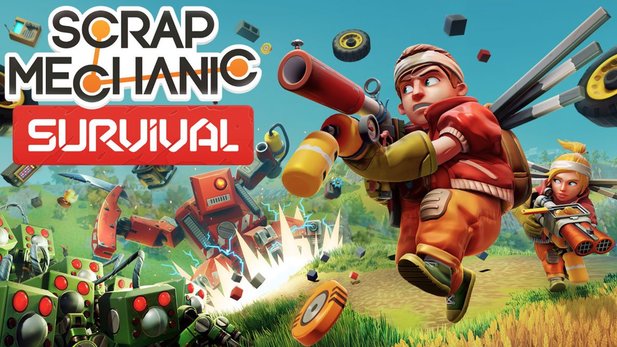 This is what Steam users say about the new update

Similar to the number of players, the positive reviews increased massively with the release of the new update. Many players are excited about the new update. Steam user Da70n900 has already sunk 264 hours of play in Scrap Mechanic and writes after the update is released:

"I always liked Scrap Mechanic and there was so much to do in Creative Mode alone. Although they released Survival Mode much later than expected, I think it was worth the wait. Survival Mode has Scrap Mechanic completely changes and gives you many options that you may not have noticed in creative mode. So you have a completely different view of the game. It has given me a lot of joy over the years and I highly recommend it to everyone. "

The new mode not only brings joy to players who have been there the whole time, but also also brings back former fans to the kit. Ironguin writes:

"I bought the game years ago. It was fun in creative mode but after a while I got bored. Thanks to survival mode I can't stop playing now, there is so much to do!"

Many games find many new possibilities and a new incentive to unpack Scrap Mechanic again in the new game mode. For others, the survival update is finally a reason to buy and try Scrap Mechanic.