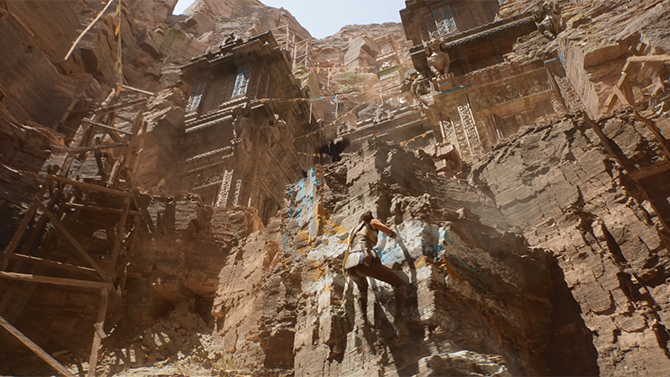 On iGamesNews, we regularly share with you the works of Raf Grassetti, the talented artistic director of Sony Santa Monica (God of War). If it is again about him today, it is not for his reinterpretation of the characters of Super Smash Bros. or Batman, but for his recent statements.

Among these reactions is that of Raf Grassetti, the artistic director of Sony Santa Monic Studio and main artist on God of War released in 2018 on PS4. In a tweet accompanied by a screenshot of the technical demo of Unreal Engine 5, Raf Grassetti quipped on the graphic level seen in this one:

Kudos to the art team that can create with this fidelity for 30+ hours of gameplay😅 pic.twitter.com/nGfYHqC43c

Congratulations to the artistic team capable of creating (a game) with this level of fidelity (graphics) for more than 30 hours of gameplay.

The current generation has brought the debates over working conditions and crunch back to the fore in game development studios. As AAA productions become more and more spectacular with larger and larger worlds, it is logical to wonder if the new technical possibilities offered by the PS5 and the Xbox Series X as well as by tools like Unreal Engine 5 will not aggravate the problems already well established in the industry.

Indeed, the expectations of players of this type of experience are always higher and this has repercussions on what is expected from development teams. Epic Games insisted in its demo presentation on features built into Unreal Engine 5 that make it easier to import and integrate high-quality graphic assets into games. In a second tweet, Raf Grassetti himself talks about the evolution of "technologies and processes

But before being imported, these highly sophisticated elements must be created. And for an entire game set in a massive open world, the amount of work required to create something as beautiful as what is seen in the Epic Games demo will remain astronomical. But a, it is only the youngest of the players' concerns to believe the exchange that followed the remark by Raf Grassetti.

When a twittos replied to Raf Grassetti that it was ultimately possible that he was the first concerned by his initial "congratulations" tweet, given the expected visual quality of each God of War game, the artist replied with a gif of a person sweating big drops. this gif, a God of War fan replied "you're sweating but I'm sure you guys at the Santa Monica Studio have the talent to do it don't you?"This change underlines once again that the amount of work and the sacrifices necessary to offer an advanced AAA does not matter to some players as long as they get a blockbuster with handsome"graphics"in the end.

One of the challenges of the next generation, accentuated by the current health crisis, will be to manage the reorganization of the development cycles of games, AAA included, so as not to end up with situations like those highlighted by developers and their families or rightly seen in Raising Kratos, the documentary on the creation of the last God of War.

😂😂😂 …. Sweating but i m sure yiu guys at Santa Monica Studio have the talent to do it, right?

What do you think of Raf Grassetti's remark and the reaction of twittos this last? Do you think the technological improvements made possible by the next generation will worsen working conditions for developers? Let us know in the comments below.