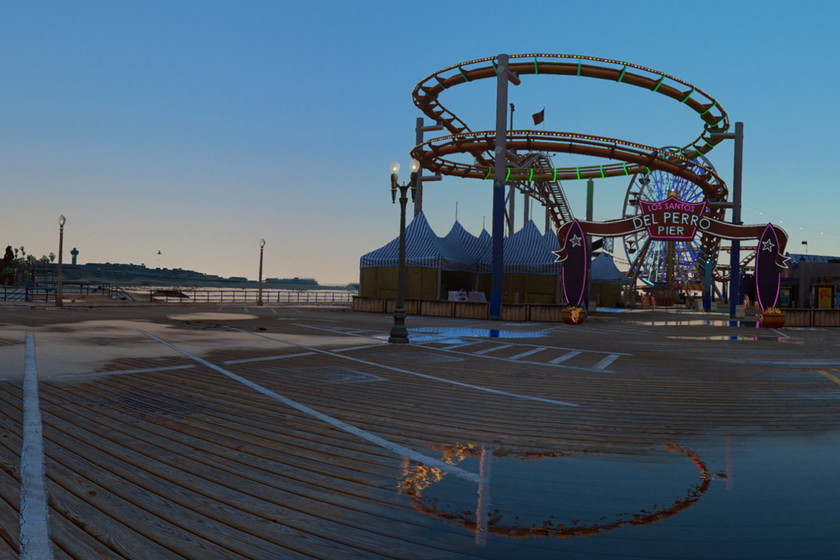 Now what GTA V will be free on PC temporarily (but keeping it forever if we redeem it before May 21), it is a good time to review the top mods photorealistic and give it a more current look and not from 2015.

And it is said soon, but the success of Rockstar Games debuted on PC five years ago … and in 2013 on consoles of the previous generation. Because yes, it was an intergenerational game, seeing how it came to PS4 and Xbox One in 2014 with improvements at the graphic and function levels, such as the first person mode. All that and much more, like the video editor, came to Windows, with the attractiveness of modsof course. And here we have delighted with authentic technical virguerías.

We begin the review by mod Zyko's Realistic Visuals, where Zykopath changed the depth of field of the original game for a much more beautiful and detailed one, with an increase in rain particles or a more effective mud effect in terms of reflections. The lights and the vividness of the colors have also been optimized, as well as corrected effects such as blur and noise.

Some additions are very subtle, but the truth is that it shows its best face at nightfall, especially for that contrast of lights and reflections. It's cool.

Precisely, in relation to the night, we have this other mod playduck titled Enhanced Night Sky where the only thing that changes is the appearance of the night and the image of the Moon. At the textures level, we are talking about a big change in its resolution, where it goes from 512×512 to 4096×4096 pixels. Beast, right?

One of the mods veterans about GTA V we find it in this creation of ToxicGuy and its CryingLightning's FX 2.0, which contrasts with the darkness of the previous one. It has different presets to give it a more cinematic touch, with much more brightness, another realistic one with more vivid tones and two variants on both. It is especially noticeable in the face of the sunset on the horizon.

Lord Tachanka is the author of GTA V Redux, a complete facelift of the success of Rockstar Games in which all the part of the climatic effects, such as fog, pollen particles or dust, have been rewritten, among a host of other improvements that affect global lighting and reflections of the game. The list is huge if we consult each section from modDB, between textures and others.

Through haskeer212 we have Pinnacle Reality ENB, a mod most current of GTA V where the post-process effects are improved by taking advantage of other types of tools, where the ray-tracing facing global illumination. The result is one of the most spectacular, as reflected in his video.

Finally, we are before one of the mods better known, that PRSA we are talking about Two years ago, standing out for that photographic effect so realistic in such iconic frames of Grand Theft Auto. The good thing is that it is compatible with others mods that enhance lighting or weather, resulting in a visually delicious set … as long as our PC can handle everything.