Here is an example of what can be made using Wallpaper Engine.

Numerous Steam users are currently demonstrating their creativity using the wallpaper engine. This tool allows you to create your own animated desktop backgrounds. According to Steamcharts, the wallpaper engine set a new record for most concurrent users of all time yesterday, Monday, March 23: 35,872.

Also at the time of this news 35,349 Steam users busy with the tool. For comparison: Stellaris currently only has 35,110 players and The Witcher 3 is also below with 30,054. All in all, Wallpaper Engine ranks 21st of the top games on Steam.

What is possible with Wallpaper Engine?

The tool enables animated backgrounds to be used on the Windows desktop – 2D and 3D graphics and videos with or without sound are supported. You can either choose from existing wall papers or make your own with the included editor.

Not only the number of players, but also the user reviews illustrate the popularity of Wallpaper Engine: Almost 140,000 reviews are "extremely positive" on average.

For which screen ratios does this work? All screen resolutions and ratios are supported, including 16: 9, 21: 9 and 4: 3. In addition, the wallpapers also run on several monitors, as is impressively shown in the following tweet:

What video formats are supported? All common formats such as mp4, WebM, avi, m4v, mov, wmv – but only for your local files. The workshop always requires mp4 format.

Do wallpapers affect PC performance? The backgrounds automatically pause while playing, so that even an elaborately animated screen video has no influence on your gaming experience.

How much does Wallpaper Engine cost? On Steam you can buy the tool for 4 euros.

We had already looked at the kit some time ago and made an introductory video on the best backgrounds: 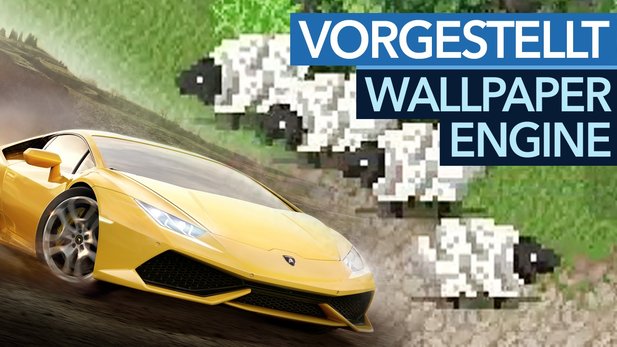 By the way, there are even 17 Achievements in Wallpaper Enginemost of which are related to the workshop.

Steam itself has also broken its user record in the past few days, even several times: recently, the number even exceeded the 22 million mark. Wallpaper Engine should also benefit from the ever increasing number of players.