The fact that The Witcher 3 did not get a first-person perspective is of course not due to Geralt's eyes.

Why was there never a first-person option in The Witcher 3, although many fans at least wanted the opportunity? This question – and more – was answered by CD Project Red's senior level designer, Miles Tost, in our Twitch livestram on MAX.

In short: one First person view from Geralt most players would have thrown up, literally.

While the first-person view would not have been a problem for exploring the open game world, Geralt's dynamic fighting style should definitely have been turned upside down. After all, fast movements like evasive roles and pirouettes play an important role in it.

As Tost explains, there were "A few tests" for a first person view, but if the camera was fixed on Geralt's head during these maneuvers, players would quickly become dizzy and sick.

To redesign the fights completely, just to offer the first person option would have been an exaggerated effort and would have created more problems than solved.

Modders have already tried it

The modding community would of course not be the modding community if it hadn't tried it. Shortly after the release, there were the first mods that should make it possible to experience The Witcher 3 from a first-person perspective. In 2016, we looked at the practical test to see why it didn't really work out. A review: 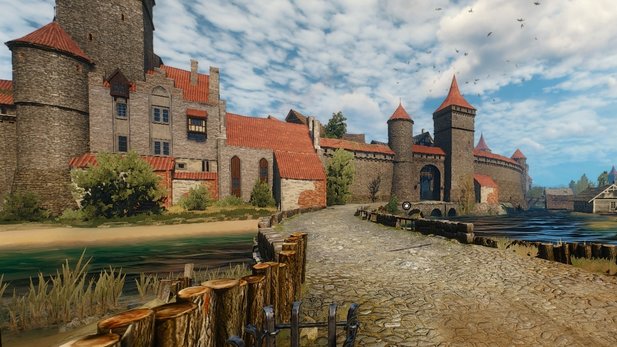 By the way, this mod doesn't seem to be available for download anymore. Nothing has really changed since then: Even at nexusmods, there is only a single, four-year-old first-person mod. Their reviews are extremely mixed – the argument of the level designer is true. Geralt is best controlled from the third person.

If you are not afraid of motion sickness and want to know how a Monster fight with such a mod would look like, you should take a look at this Youtube video from »M R«, which shows a scene from Blood and Wine. We warned you.

In their new game Cyberpunk 2077, CD Project is taking the completely opposite path. Over there almost exclusively first person perspective, you won't be able to switch to shoulder vision. You can only see your character V in selected cutscenes – not all fans find this idea good. We discussed the advantages and disadvantages of the different perspectives in the video.