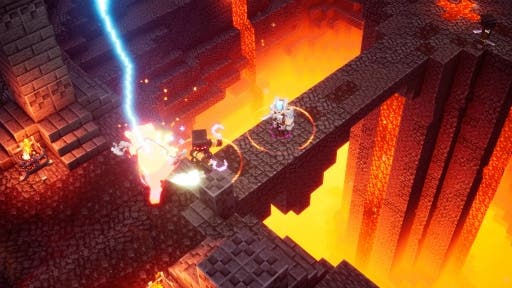 The renowned IP of Mojang, MinecraftIt seems to be at its best in history with 200 million units sold and 126 million players per month, an impressive number that could continue to increase in the future.

However, the company wants to attract another type of public or diversify its community with a new proposal titled Minecraft dungeons, more focused on adventure. The funny thing is that in an interview posted on his blog

, the developer confirmed that this third person top view isometric game was created from a first person perspective. You might think that this would limit designers' vision, but creatives claim that experience compensates for this factor.

You can find his words below:

Laura de Llorens (game and level designer): Yes, we did it in first person. So it's a bit of a back-and-forth between creating things in vanilla and testing it in the dungeon perspective, making sure all rooms are well connected and make sense to each other.

Christian Berg (level designer): I think it's important to know that after building levels for a certain time, you will eventually get used to the measurements and distances between things, so you will know that “such a wide or high road will work, while one of this height or width will not »and what kind of geometry to avoid so as not to obscure the player with the structure and such.