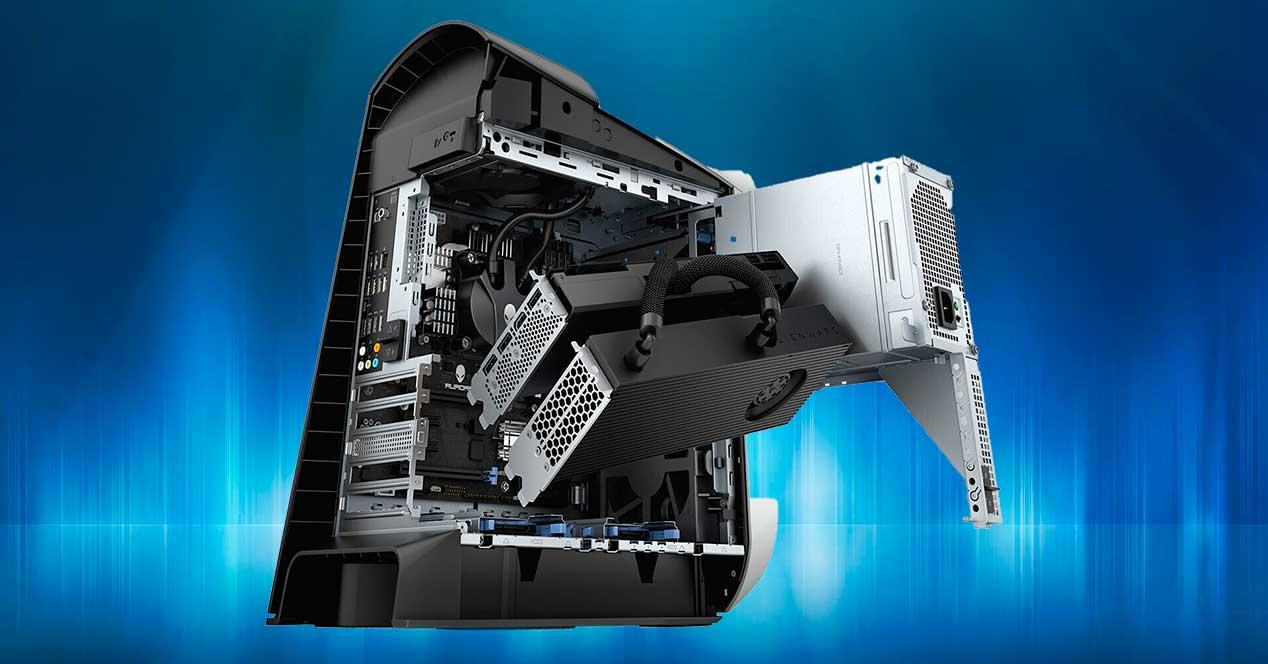 There are three new product updates. On desktop computers we get the Alienware Aurora R11 which now has the latest 10th generation Intel Core processors and a new liquid cooling system.

Alienware Aurora R11: now with fluid cooling on its GPU

Available storage options 1 TB and 2 TB hard drive at 7,200 RPM, being able to add a NVMe M.2 SSD starts from 250GB up to 2TB. Second drives can be installed to accelerate space including SSD and SATA HDD, but it also has the potential to integrate the Intel Optane M10 with 7,200 RPM of hard drive.

Ethernet connectivity is 2.5 GbE, which is now standard, while WLAN options include Intel solutions and Killer 802.11ax + Bluetooth 5.0.

. Only the R10 model had liquid cooling in the processor, the new R11 in both parts.

Because of this, the noise is reduced by 70% and decreases the temperature to twenty%. The air flow of the box has been increased with the increase of 6% thereby improving its performance at ambient temperature.

This is the first Alienware to install a GPI fluid cooling GPU system with a bracket bracket, perfect for solving the problem in small gaps as it is a prototype that allows it to be used in compact size cases and can cool both CPU and CPU. Liquid GPU (they are two independent AIO systems).

The GPU program enters the PCIe slot on the motherboard as if it were just another graphics card. This improves the aesthetics inside the box by avoiding creating dirt with multiple tubes and enhancing indoor air flow.

Alienware m15 R3 and m17 R3, refreshed us by Intel and NVIDIA

In the memory segment, its configuration starts from 8 GB of up to 32 GB of single channel for its maximum configuration, with base modules 2933 MHz RAM or at the top of the range with 3200 MHz modules. with 256 GB NVMe SSD with the opportunity to add one drive to configure it in RAID. Graphics card options range from the GTX 1660 Ti to the most Power RTX 2080 SUPER (from laptop).

Finally, the Alienware m15 R3 and Alienware m17 R3 models, 15.6 and 17.3-inch models respectively from the product, also received updates. They have several resolution options and screen refresh rate from Full HD to 4K UHD and from 60 Hz to 300 Hz. We will be able to find out Tracing of Tobii as an additional.

Both the Alienware m15 R3 and m17 R3 use the Intel generation processors called "Comet Lake-H". Basic repairs include installing the Core i5-10300H, or we can choose to expand it to the i7-10750H and up to the i9-10980HK. Memory options start from 8GB on a single channel to 32GB on the Dual Channel, and only come with the DDR4-2933 option on these models.

In the final stage they came up with 256 GB M.2 NVMe SSD which can be increased to 1TB of capacity. In the graphic section they start from the GTX 1650 and up to RTX 2080 SUPER.

These new machines will be available soon in Spain at prices not specified by the product.

How to upgrade my router's wifi signal

Will there be a cheap Samsung Galaxy Fold?