Season One of Call of Duty®: Black Ops Cold War is setting the bar high for the biggest year in Black Ops, with a reinforced roadmap of new content.

Today comes the last big update of Black Ops Cold War and Warzone™, in which both titles officially receive additional unlockable weaponry this week and a new Deadly Operator next week. The players of Black Ops Cold War They also get new Multiplayer and Zombies game modes today, including Dropkick and Cranked, along with a massive new 40-player arena map and more Multiplayer modes to come.

And the action won’t stop there. On February 4, prepare to witness the next heartbreaking chapter in Dark Aether’s history in Zombies and return to a competitive map of Black Ops II fan favorite in Multiplayer, in addition to new packs that will be released at the beginning of the month to celebrate the holidays of the season.

Do you need a picture of your goal? We have you covered and much more. 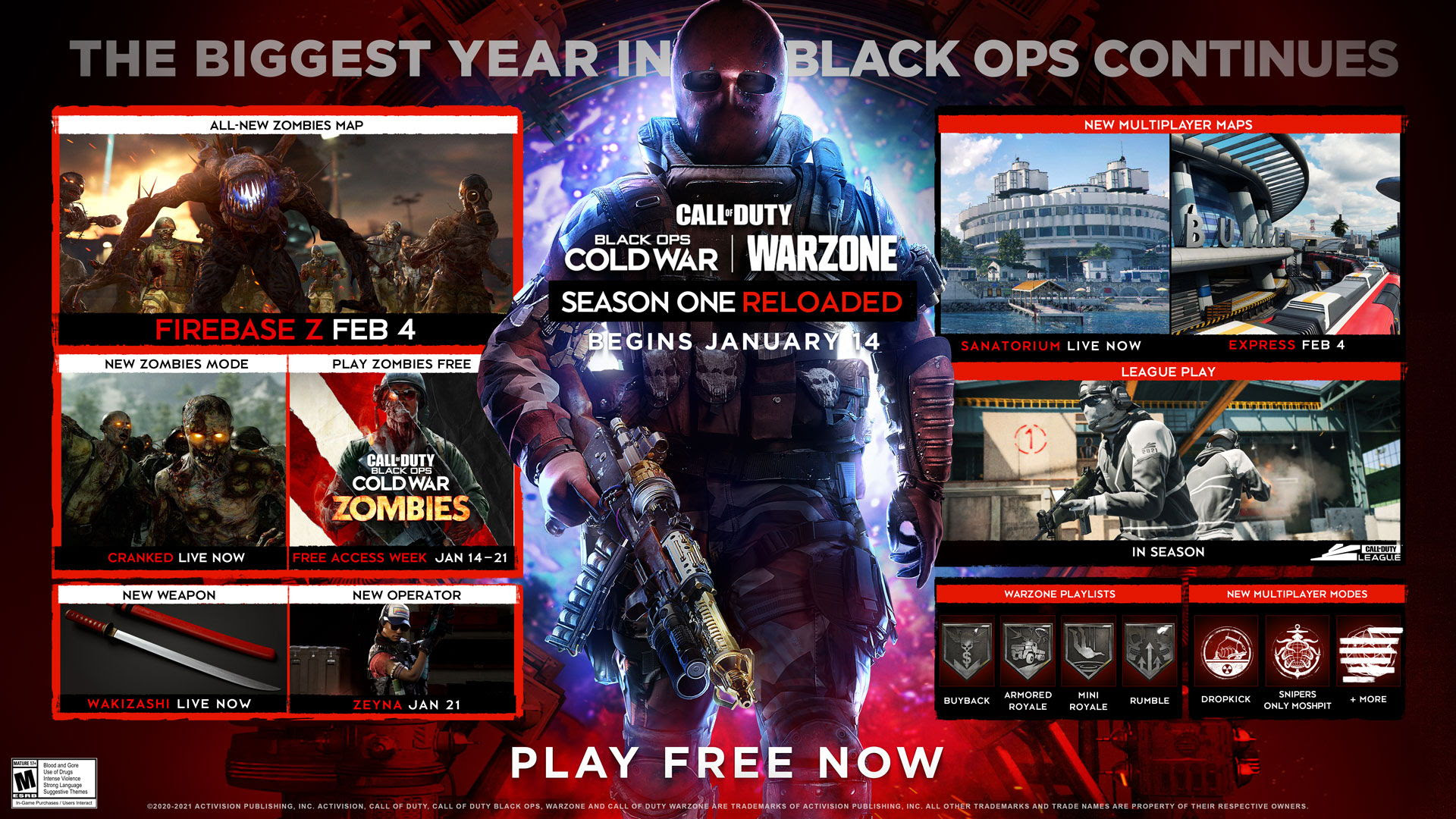 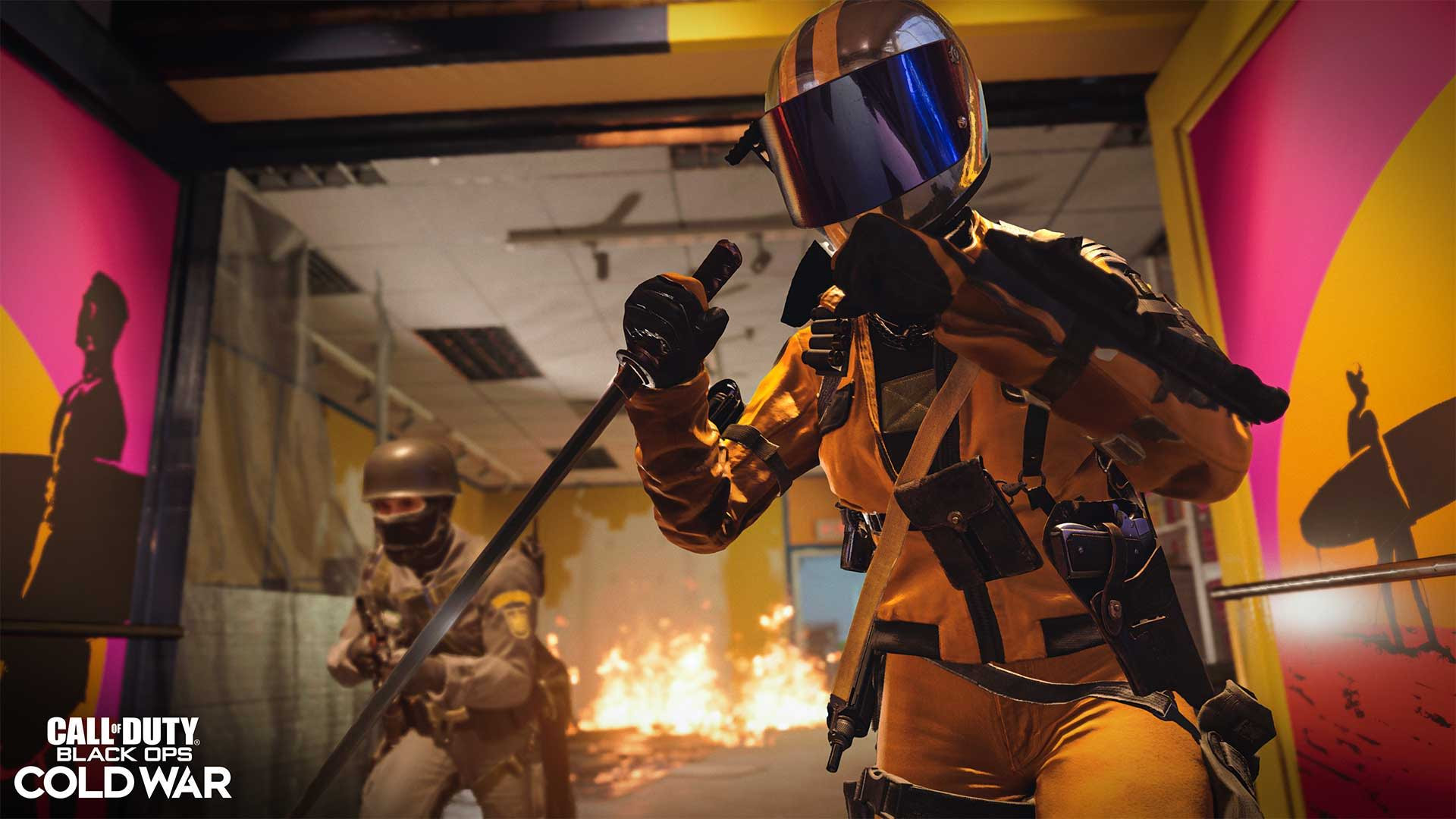 A self-defense weapon and a companion sword to the samurai katana, this traditionally forged blade uses two types of steel in its construction and is lightweight, extremely strong and durable.

Compared to the standard knife, the Wakizashi offers slightly better range for speed, opening up new strategies for those who want to bring knives into a shootout.

Like the Streetsweeper shotgun, the Wakizashi can be unlocked through an in-game challenge, where it can then be leveled up for camouflages and XP. A blueprint of the same weapon family is also available today in the new “Disavowed Assassin” bundle. 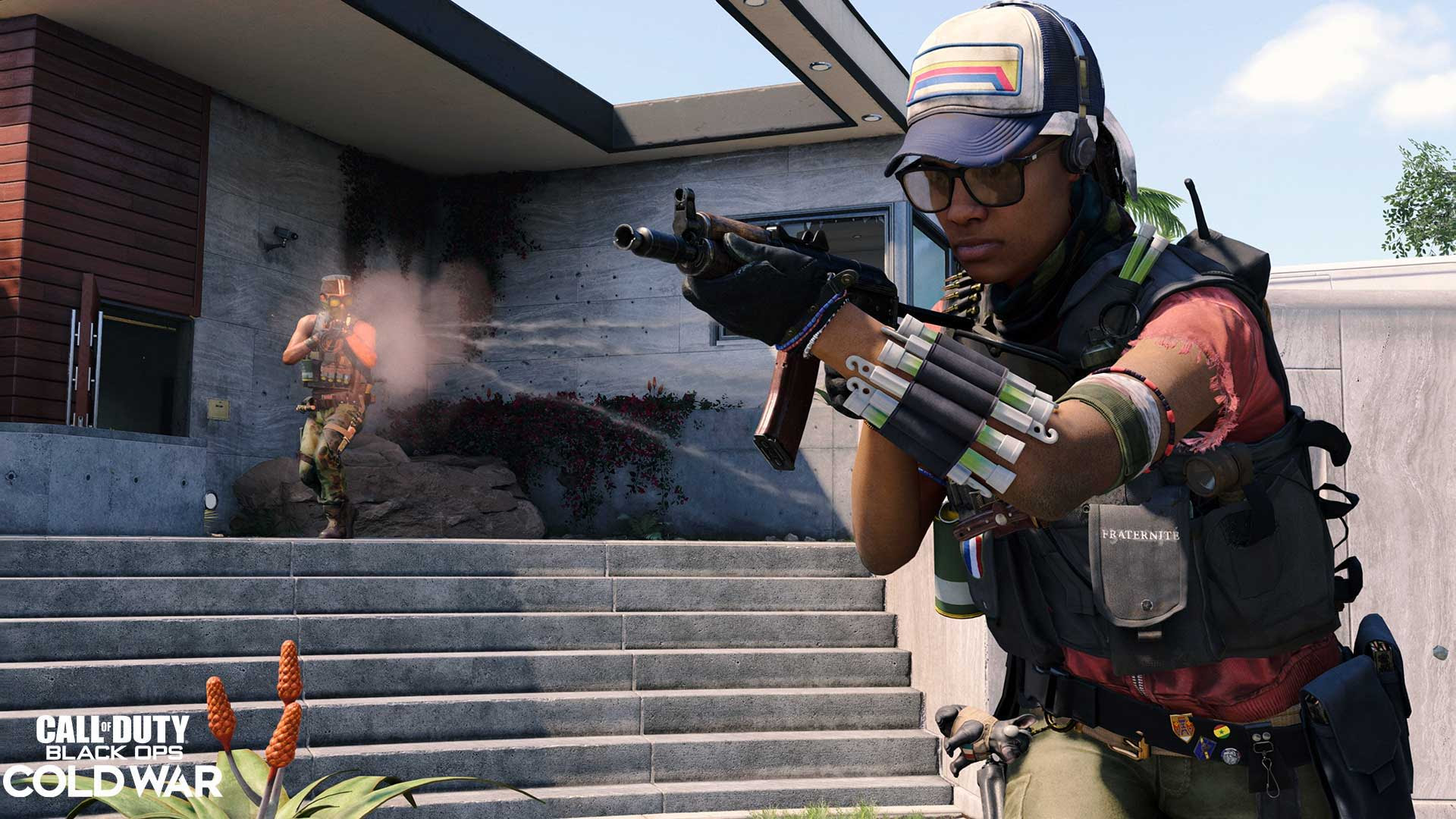 NATO wins another badass Operator for its ranks, as Zeyna Ossou, last seen alongside Bulldozer and Russel Adler at The Pines Mall to defeat Stitch, will be available for deployment next week.

This Senegal-born DGSE specialist in mobility and heavy weapons has been a fan of motors for as long as she can remember. Growing up around the garages of his rally driver father, he jokes that he has gasoline in his veins. Although she takes risks and is a bit wild during infiltrations, Zeyna’s colleagues know that she is who you want at the tip of the spear.

Get Zeyna to Black Ops Cold War and Warzone as part of a shop package during Season One. Ten teams of four will head to the Ural Plains to battle for targets and vehicles on land, sea and in the air.

Here in the Urals, there is a Soviet experimental health shelter, the center of a clandestine investigation of NATO forces in September 1984. Low forested hills provide cover for squadrons to gain reconnaissance on the main “hotel” of roughly circular in shape: a concrete, brutalist architectural giant flanked by lakeside structures and a large wooden pier.

With links to secret tests within State Sanatorium U-23, notes found within the grounds of this sprawling complex indicate a conditioning test known as Project Golova. Coming back from Call of Duty: Black Ops II, Express arrives on February 4 at Black Ops Cold War as a 6v6 multiplayer favorite, fondly known as the high-tech train station that hosted many amazing moments in the competitive history of Call of Duty.

Express is a U-shaped map with two train tracks running through the main lobby of the transportation hub. Players can expect a lot of melee combat in the room, but be aware that its glass ceiling leaves it susceptible to enemy Scorestreaks.

Long-range combat can take place across train tracks, especially when looking from the air bridges on both sides of the map. These areas are also great places to see one of the high-speed trains passing the station on one of the tracks, where you won’t hesitate to cut out any operator who doesn’t care about space.

The Multiplayer of Black Ops Cold War gets even more new game modes throughout Season One, as well as the continuation of the fast-paced 3v3 experience, Face Off. 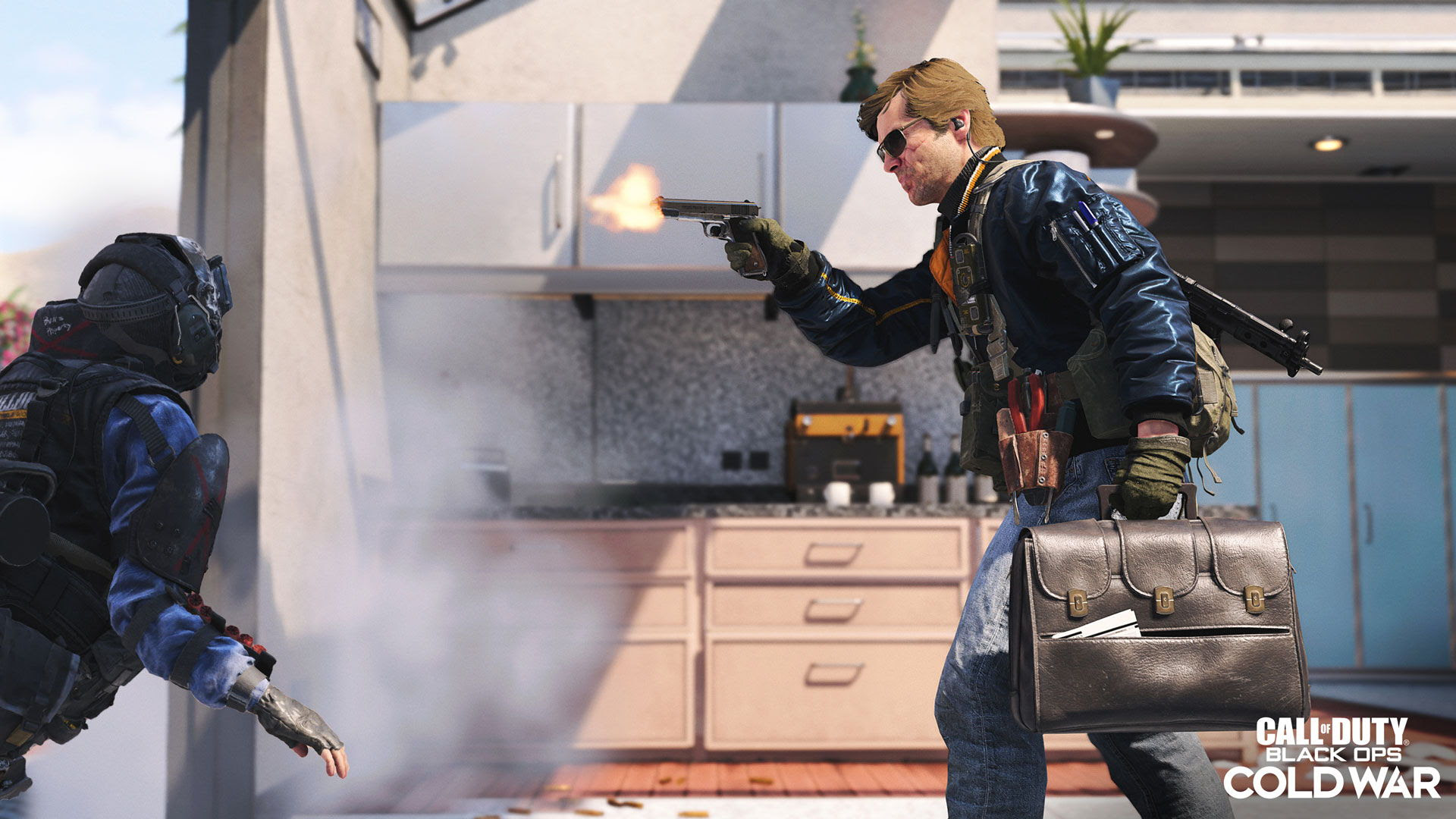 This frenzy of nuclear hot potato game features two teams vying for control of an extremely important briefcase. The round begins with each team running to the location of the nuclear briefcase and attempting to pick it up. Anyone who grasps the briefcase is automatically equipped with a powerful pistol, but ideally the rest of the team will keep the wearer safe. The team with the briefcase gains access to launch codes, as well as an increasing score for their team.

If you die while your team controls the briefcase, you will not respawn until your carrier has been eliminated and the briefcase has been dropped. If your team doesn’t carry the briefcase, they should empty it and get it back before it’s too late. Once a team reaches the scoring limit by controlling and owning the briefcase, the orders to execute a nuclear strike are confirmed and the round is won… in a very explosive way! The first team to score 200 points wins.

Snipers Only Moshpit (During the season)

Brace yourselves, snipers. Later in Season One, Treyarch will bring the new Snipers Only Moshpit mode to Black Ops Cold War, where two teams of six will launch into Team Deathmatch and Domination with all restricted weapons except sniper rifles. Deadly and tactical gear, as well as Scorestreak weapons (like the War machine), will also be restricted for an exclusive sniping experience. 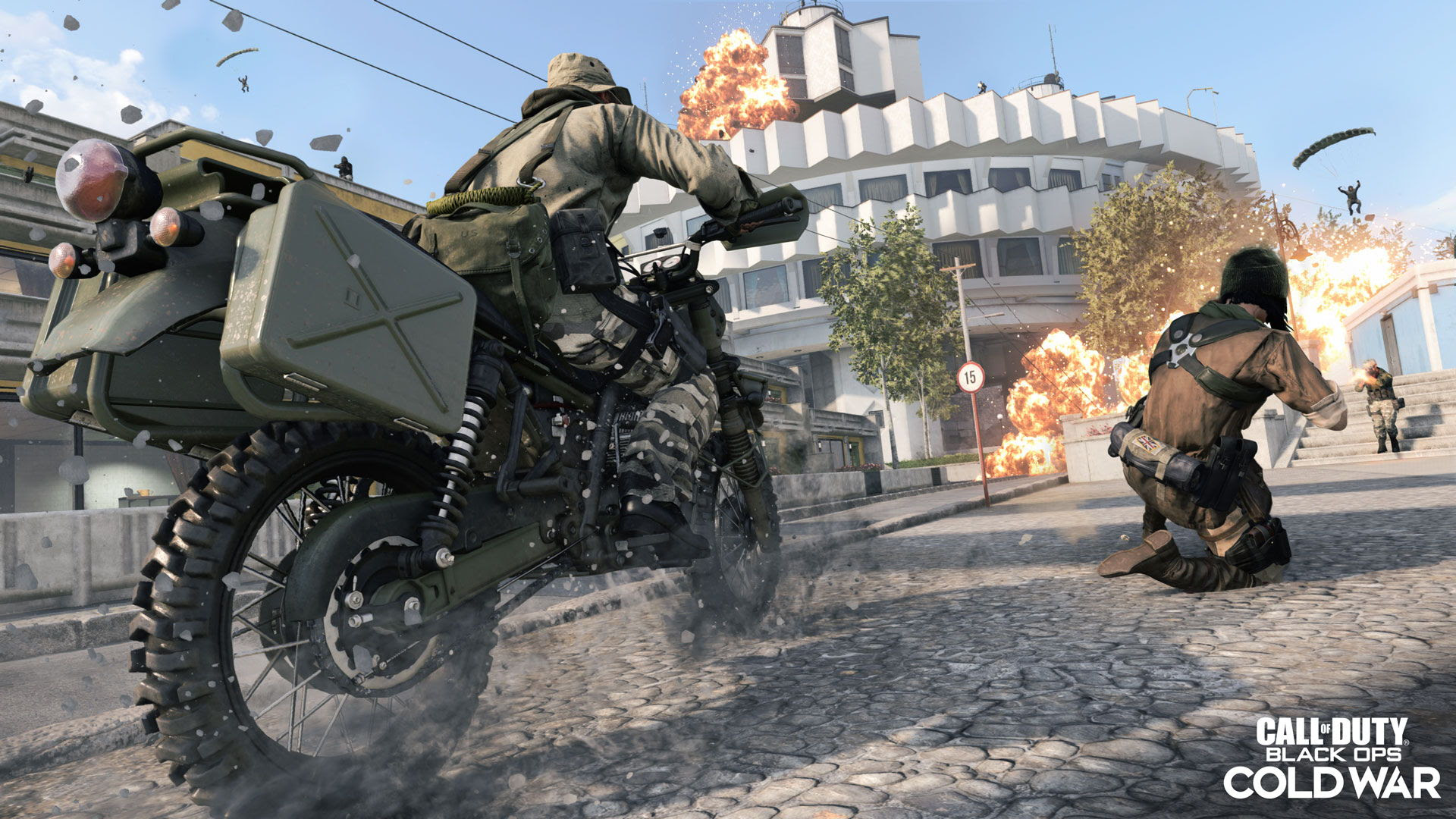 Endurance Mode (During the season)

Following this season’s Tactical Duo variation, the biggest game mode in Black Ops Cold War is about to take the experience of 10 teams to a whole new level.

In the next variant of Endurance, 10 squads of four will enter Alpine, Ruka, and Sanatorium to collect uranium and hand bombs throughout the game. However, after a bomb detonates, a new one will come online to take its place, ensuring that there are always five bombs available rather than an initial set of five that boils down to a single bomb. This introduces a new layer of strategy and non-stop action to these already intense 40-player battlefields.

The score limit will also double from 500 to 1,000 in Endurance mode, making it perfect for completing multiplayer challenges. Join your squad and experience the game’s most elaborate maps in a whole new way. 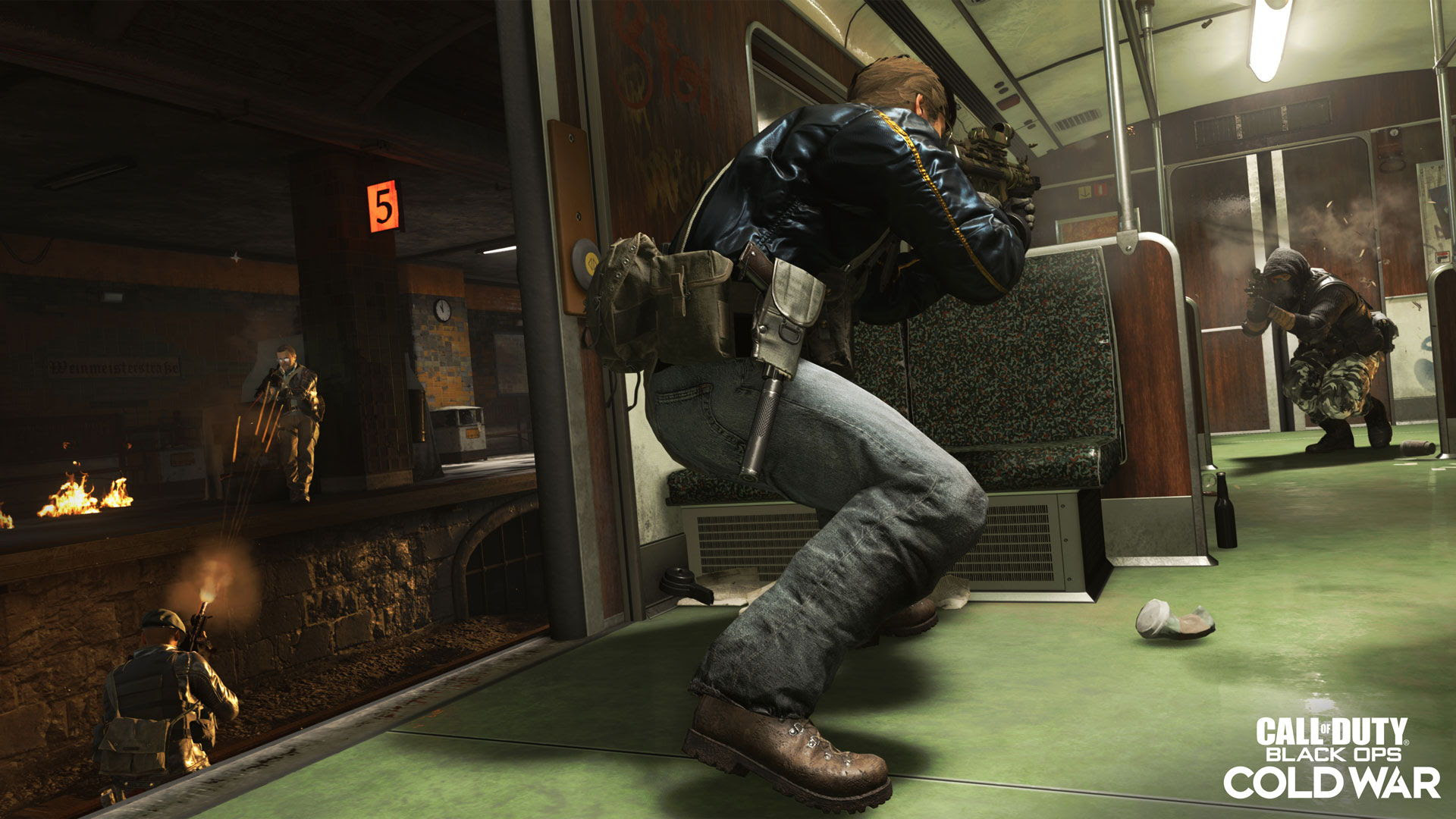 This fast-paced small team mode is here to stay in Season One, and it’s ready for your trio to claim dominance in respawn modes across four frenzied maps across Black Ops Cold War.

If you haven’t experienced Face Off yet, this playlist includes 3v3 game modes like Team Deathmatch, Kill Confirmed, and Domination on the latest Gunfight maps: Game Show, ICBM, U-Bahn, and KGB.

Great for racking up weapon camo challenges or a quick warm-up before diving into bigger modes, Face Off will be around throughout the Season One sequel beyond this week.

As Season One moves into February, the Dark Aether story continues with an entirely new map of Black Ops Cold War Zombies, sooner than you expected.

But before you arrive, look forward to fighting for your life in Cranked, surviving the Onslaught in Raid (exclusive to PlayStation *), and welcoming new members to the Zombie community during Free Zombie Access Week. Best Today:  After two months of being installed under the Thames the iPhone 8 continues to function

Today, “Die Maschine” gets its new limited time mode, both literally and figuratively.

In Cranked, you’ll have to keep one eye on the countdown timer and the other on your zombie slaughter – if you go too long without eliminating an undead, you will explode. There is no time to waste, as your survival depends on frenzied and terror-filled casualties, where the only respite is the ignition of the Cranked Timer, which grants you a brief respite before the carnage continues.

Requiem PlayStation members will face a new challenge on the legendary Multiplayer Raid map, starting today. And on February 4, Express will also join the map roster when it makes its Onslaught debut.

Go for the gold as you keep up with the Dark Aether Orb, which will travel to different areas of Raid’s elegant Los Angeles mansion as the zombie horde grows more fearsome. Earn bronze, silver and gold rankings by destroying enough elites and you will unlock some exclusive rewards *. You might even discover some new Dark Aether information along the way … Do you want to experience the frenetic action of Zombies, but don’t have Black Ops Cold War? For the first time in the history of Call of Duty, Treyarch’s legendary Zombies mode will be available for free during Free Zombie Access Week, which starts today through January 21.

Read more about it on our blog Free Access Week.

With the “Projekt Endstation” site destroyed after investigating the Dark Aether anomaly in Poland, the Requiem response team led by Grigori Weaver now turns their attention to the latest site in the outbreak, codenamed “Firebase Z” .

The next chapter of Black Ops Cold War Zombies kicks off February 4 as Season One continues. Stay tuned for more information from Treyarch on their blog. Celebration of 115 days today and tomorrow! Along with Zeyna’s unveiling and a Zombie-themed crimson Bulldozer skin, the shops of Black Ops Cold War and Warzone will receive new themed packages to commemorate the February festivities.

Celebrate the Lunar New Year with Legendary Weapon Blueprints with Tracer Rounds as part of the “Tracer Pack: Year of the Ox” bundle, send shots to the heart of your enemies with the “Top Secret Admirer” bundle and bring some Mardi Gras to! battle with the “Carnival Captain” bundle, which includes an epic “Breaker” skin for NATO’S Baker.

To celebrate the continuation of Season One, the Double XP Weapon Weekend is coming to Black Ops Cold War and Warzone from January 15th to January 19th. This is a great opportunity to quickly earn accessories for Streetsweeper or camos for Wakizashi as soon as they appear, or keep striving for those DM Ultra and Dark Aether mastery camos in MJ and Zombies. 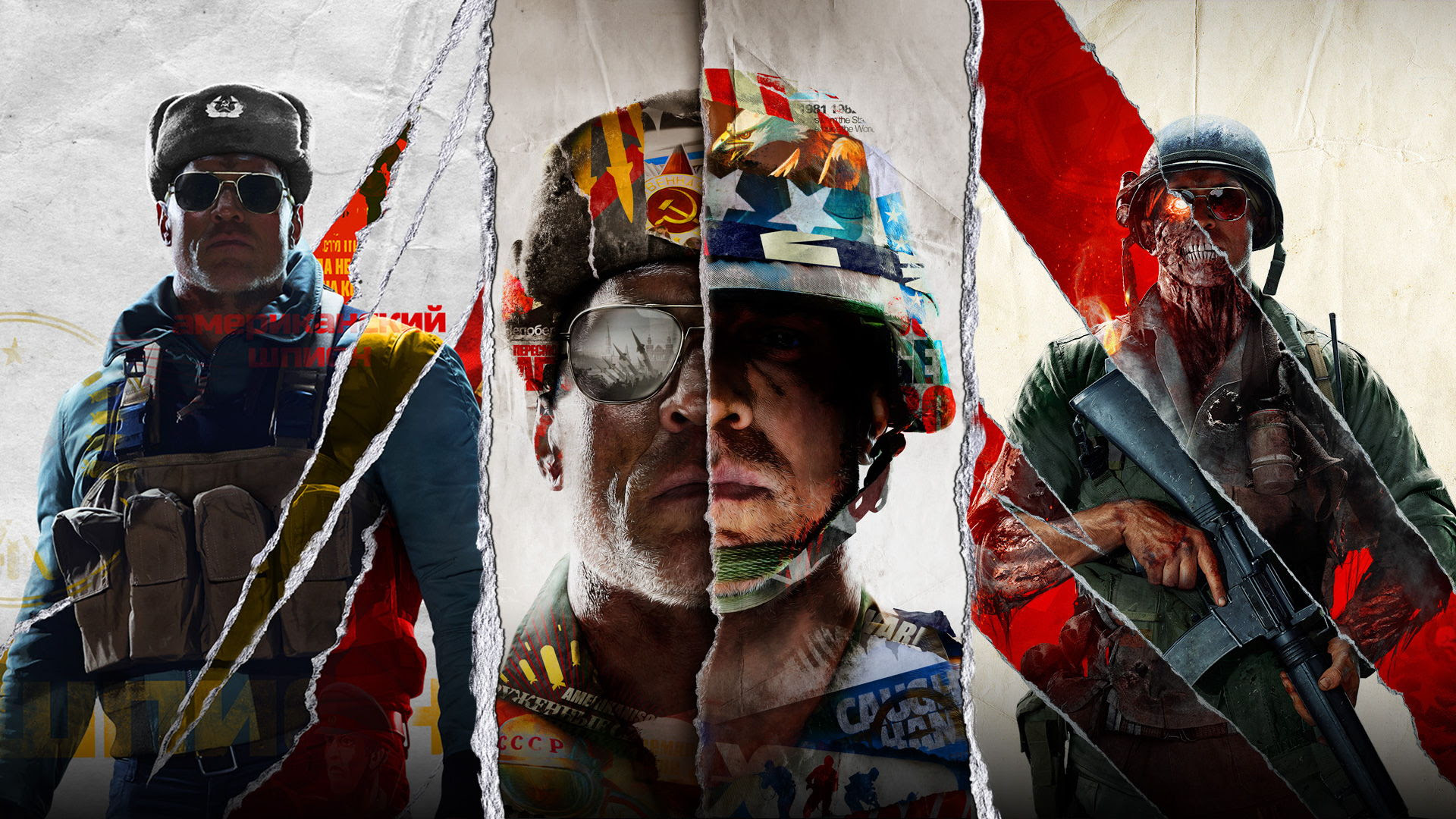 Are you ready to get all this content but you don’t have the full version of Black Ops Cold War? So now is a great time to buy the game: Join Alex Mason, Frank Woods and Jason Hudson in a mind-blowing campaign to hunt down a global threat codenamed “Perseus.” Take part in a variety of new competitive modes and multiplayer maps and test your mettle by battling legions of undead horrors as Requiem agents in Zombies!

Visit CallofDuty.com, select the Buy from button Black Ops Cold War, select your preferred platform and region to get the game. Download to start playing.