Eleven, Hopper, The Demogorgon, and The Mindflayer are no longer in Hawkins. They’re in the battlefield of the gods, as part of the all-new Smite x Stranger Things crossover event starting July 13 on PlayStation 4!

Bringing Stranger Things to life in Smite has been a dream come true for our team, and I can’t wait to share with you how our dev team has been overwhelmed. 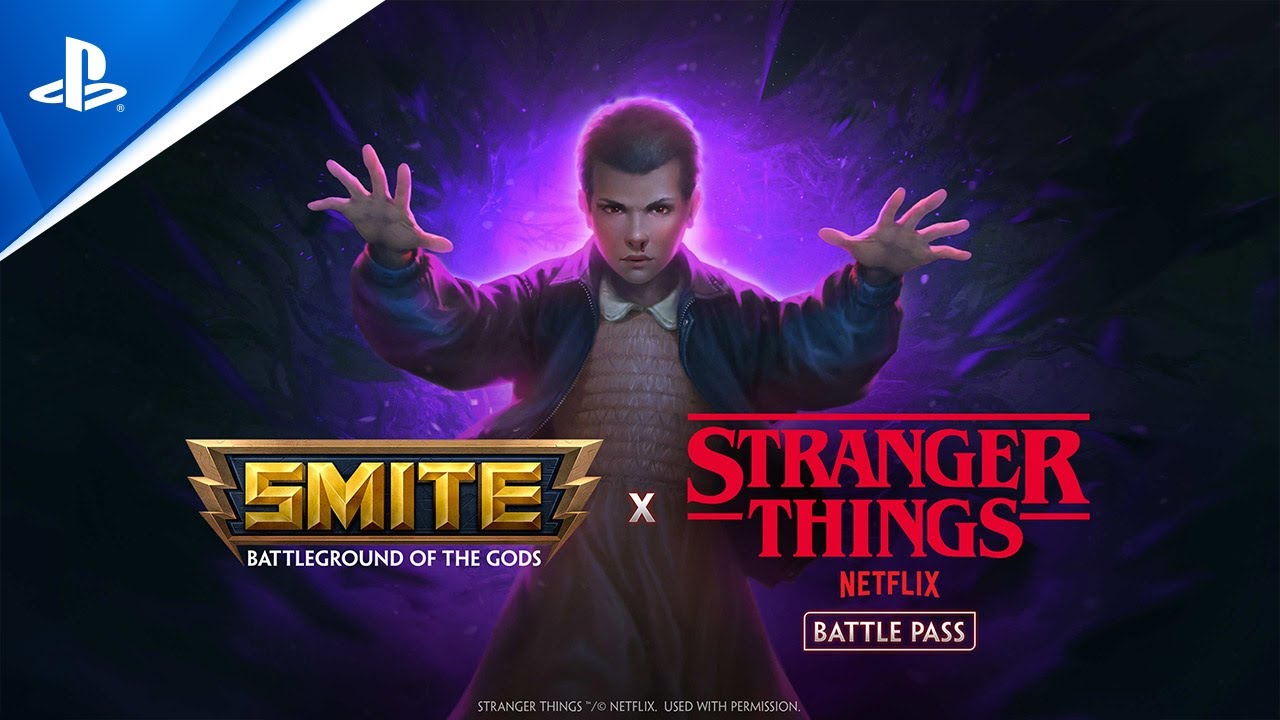 The Smite x Stranger Things crossover brings four Stranger Things fan favorite characters to life in Smite. Eleven, Hopper, The Demogorgon, and The Mind Flayer are all available as part of an all-new Battle Pass.

Each Stranger Things character comes to life as an incredible skin for an existing Smite god: Eleven Scylla, Hopper Apollo, The Mind Flayer Sylvanus, and The Demogorgon Bakasura. When you purchase the Battle Pass you will instantly unlock Hopper Apollo or purchase the Battle Pass Plus to instantly unlock everything up to Demogorgon Bakasura. Of course, there are also tons of free rewards – and a Prestige track with 60 extra levels of goodies and a special ’80s mall-themed Starcourt Eleven Scylla.

The Battle Pass isn’t all we’ve got planned for this epic crossover. For the very first time, we are implementing a crossover in the environment of one of our game modes.

When you look around the Arena map, you’ll notice that Stranger Things’ Upside Down brand has infiltrated the classic Roman Coliseum. The skybox has been updated to a dark and doomed sky with The Mind Flayer looming above the battlefield. You can also find fun reminders of the show like flashing Christmas lights. Look closely to see if you can find any surprises our environmental artists may have been hiding.

When the team first heard about the Stranger Things crossover, we were beyond excited. Our studio includes great superfans who wanted to get the characters just right. We knew from the start that Eleven had to have his iconic headband, and the Mind Flayer had to be as meaty and creepy in the game as it was in the series.

I mean who throws a car, really?

We start each crossover by focusing on the abilities of our gods. If Eleven were to become Scylla, the Greek Horror of the Deep, how could we change her ultimate? We know that Eleven doesn’t secretly hide any dog-headed monsters, but Scylla’s iconic ultimate “I’m a Monster” sees these giant dogs attacking her enemies. How could we replace this ultimate with something true to Eleven?

We sat down and watched a few episodes of Stranger Things, and we found our answer in season 3. There’s an unforgettable scene where Eleven picks up a car with her abilities and throws it through the mall. One of our artists was the first to say, “What if this is Eleven Scylla’s ultimate?” It was difficult to get the car to feel up to the dogs’ play mechanics (i.e. hitting target in the same way, audio cues), but once the team got it We saw in the play test we knew this was the way to go.

From god to monster

The Roman Guardian of Nature Sylvanus is a god deeply connected with nature… while The Mind Flayer is a monster who is an affront to nature. But upon taking a close look at Stranger Things, we realized that this unlikely pairing was the perfect fit for bringing The Mind Flayer to life in Smite.

The peaceful tree of Sylvanus is replaced by the fleshy tendrils of The Mind Flayer. Watch closely and you’ll even notice tendrils move in and out of his body, much like how The Mind Flayer absorbed and altered body parts on the show. Nature’s Grasp ability is changed from a gripping vine to a slimy tendril, extending from The Mind Flayer’s mouth to grab unsuspecting enemies. It’s scary but really cool.

These are just a few changes the team has made to the game and I can’t wait for the players to step into the game and check everything out. If you’re a fan of the show you’ll love the callbacks we’ve made, and if you’re just a Smite fan who’s never seen Stranger Things, you’ll still love these creative shots of your gods. favorite.

Special offer for PlayStation Plus members