5G continues to spread across all price ranges on Android mobiles. While it has been out for a long time in the Galaxy A series, with the Galaxy A90 in 2019, it was hesitant for the moment to reach the Galaxy M series. Until now, with the arrival of the new one. Samsung Galaxy M42 5G.

The Samsung Galaxy M42 5G is the first Galaxy M with 5G, although the terminal is a constant already seen of the Samsung Galaxy A42 5G. This model is distinguished by its AMOLED screen, big battery and four-lens camera.

The first Galaxy M with 5G

Samsung launched the Galaxy M series a few years ago, focused on entry and mid-range and, in theory, below the Galaxy A series. Several terminals with a large battery have arrived, such as the Galaxy M31, but always the switch to 5G was pending. This jump now comes with the Samsung Galaxy M42 5G, which is almost identical to the Samsung Galaxy A42 5G.

The latest connectivity comes to the Samsung Galaxy M42 5G from the hand of the Snapdragon 750G, which is accompanied by 6 or 8 GB of RAM and 128 GB of storage expandable with a MicroSD card. The hallmark of the series, the large battery, is still there. Includes a 5000mAh battery with 15W fast charging support.

The terminal a display of 6.6 inch with AMOLED panel and with a notch at the top. The screen has HD + resolution and maintains the standard 60Hz refresh rate. The fingerprint reader is hidden beneath its surface.

One of the few differences between the Samsung Galaxy M42 5G and its A-series cousin is that this time the terminal is launched with Android 11 with One UI 3.1 in addition, while the A42 5G had Android 10 and One UI 2.5. The terminal has NFC and mini jack. 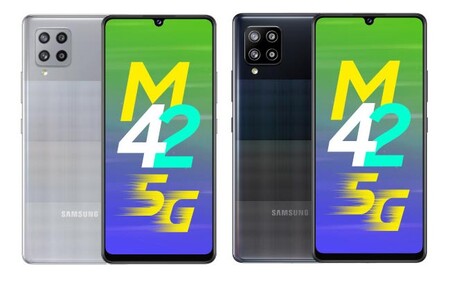 The Samsung Galaxy M42 5G has been officially announced in India, with no news yet on its possible distribution in other regions. It can be purchased from May 2 in black and white colors and in two variants:

Resident Evil RE: Verse will not actually be released with Village

Resident Evil RE: Verse will not actually be released with Village